Section 2: Peripheral Ecosystems of the Everglades

Peripheral Ecosystems of the Everglades

In addition to the central core of the Everglades watershed—the Kissimmee River headwaters, Lake Okeechobee, and the Everglades south into the mangrove estuaries and coastal waters at the south end of the system—hydrologic diversions of the Everglades watershed have greatly altered five ecosystems that also transition into coastal waters. They are (1) the Caloosahatchee River and lower Charlotte Harbor, (2) the St. Lucie River and Indian River Lagoon, (3) the Loxahatchee River, (4) the Lake Worth Lagoon, and (5) Biscayne Bay.

The Caloosahatchee and Charlotte Harbor

In recorded history, the Caloosahatchee has always had a large lower estuary—the wide, shallow, 17-mile lower portion from the river’s mouth at Charlotte Harbor’s San Carlos Bay northeastward to Beautiful Island. The essentially separate watersheds of the Caloosahatchee and the Kissimmee–Lake Okeechobee– Everglades system began to merge in 1882. Changes to the Caloosahatchee were based on (1) use of the Caloosahatchee as a major flood control outlet for Lake Okeechobee, (2) concurrent uses for navigation, and (3) a water supply for the Ft. Myers area. The natural river had been canalized and designated C-43. The canalized river with controlling dams and boat locks facilitated periodic massive releases of fresh water into the estuary, both from the Caloosahatchee watershed’s drainage network and from Lake Okeechobee, and the alternative—minimal, to no releases during droughts, even less than the historic natural system’s dry season flows. Beginning in the 1970s, with increasing eutrophication of Lake Okeechobee, these releases also damaged the freshwater upper river, and caused additional damage to the estuary and San Carlos Bay with nutrient enrichment problems, commonly seen as green-colored algal blooms. 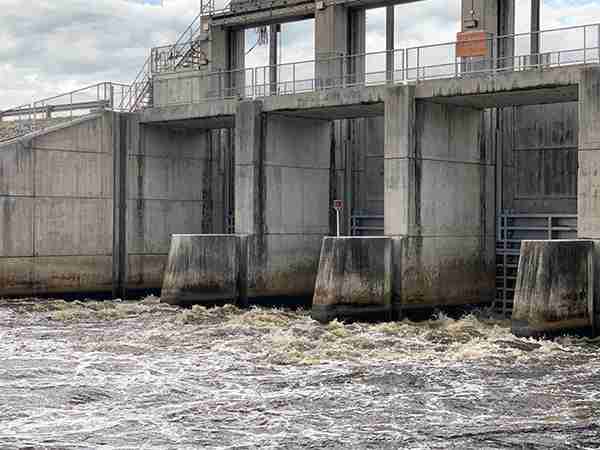 The ecosystem of the St. Lucie River and Indian River Lagoon, one of the largest estuaries on Florida’s east coast, was historically very different from its condition today. Whereas the Caloosahatchee–Charlotte Harbor ecosystem had a minor, seasonal connection to the Kissimmee–Lake Okeechobee–Everglades watershed, the SLR-IRL ecosystem was isolated from any such surface connection. Nevertheless, it followed a parallel history of major hydrologic connections and resulting deleterious ecological changes. Periodic excessive freshwater releases from Lake Okeechobee, together with other changes to the estuary, have reduced its former ecological integrity.

Prior to 1892, the Indian River Lagoon and the St. Lucie River had been predominantly a freshwater to lightly brackish environment, without a local outlet to the Atlantic Ocean. In 1892, residents determined to get navigable ocean access dug through Hutchinson Island, and the St. Lucie Inlet was born. The constrained freshwater ecology of the Indian River Lagoon and St. Lucie River transitioned to a tidal estuarine system, and new ecological values developed. The changed ecosystem attained the greatest species diversity of any estuary in North America.

Many alterations of the St. Lucie River and Indian River Lagoon estuary have damaged its ecology. In addition to drained watersheds, nutrient-laden agriculture and residential runoff, it is the redirected excess waters from Lake Okeechobee, coming through the St. Lucie canal that have most dramatically stressed the estuary, overwhelming the estuary with episodic freshwater releases causing sudden, drastic salinity reductions since the 1920s. 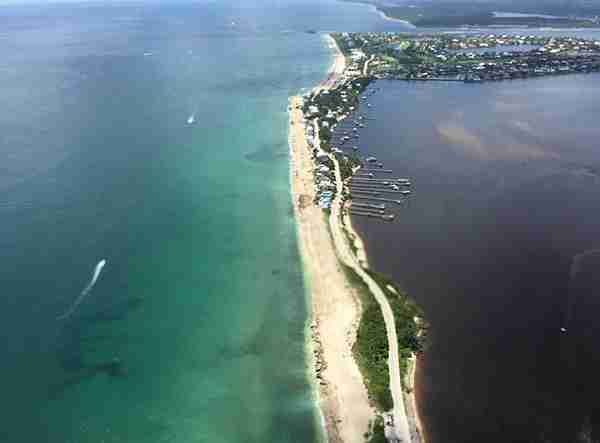 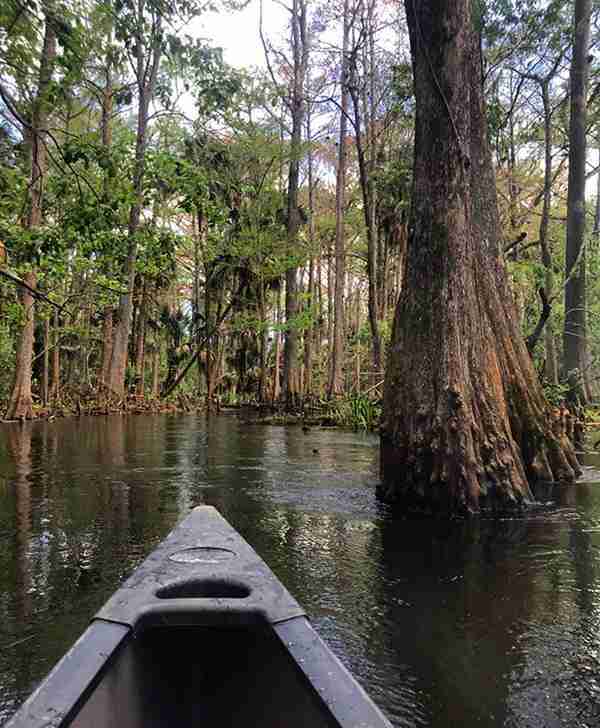 Wild and scenic portion of the Loxahatchee River at Riverbend Park.

The next river system south of the St. Lucie is the Loxahatchee. Unlike the St. Lucie River and Indian River Lagoon, the Loxahatchee’s watershed was connected to the Everglades through linkages that no longer exist in any semblance of natural form. Interrupting these connections set the stage for another kind of environmental impact—too little fresh water.

The lower Loxahatchee River is formed from three main tributaries, the North Fork, Northwest Fork, and Southwest Fork. The river flows into the Atlantic Ocean through the Jupiter Inlet. Historically, the Jupiter Inlet was only intermittently open, but became permanently maintained in 1947, converting the Loxahatchee embayment and lower tributaries from freshwater to estuarine.

Changes to the Northwest Fork have primarily resulted from the inland movement of saline conditions. In contrast to the Caloosahatchee and St. Lucie rivers and estuaries, nutrient enrichment has not been identified as problematic. Three factors are responsible for the saline influx:

Of these, restoring sufficient freshwater flow is the only practicable approach, and is the focus of restoration and of remedial actions that have occurred in the past.

The Lake Worth Lagoon

Although much narrower, the Lake Worth Lagoon is similar to the Indian River in being a coastal lagoon separated from the Atlantic Ocean by a narrow barrier island. Mostly about a half mile wide, the Lake Worth Lagoon extends 21 miles from PGA Boulevard near North Palm Beach southward past the City of Lake Worth to Boynton Beach. Prior to the construction of a stable inlet to the ocean in 1877, Lake Worth was fresh water. It was known to the Seminole Indians, who had settled along it in the 1850s, as “Hypoluxo,” meaning “long water.” Its source of fresh water was drainage out of extensive wetlands on the west side, which in turn were fed by local rainfall. There were no significant streams and no surface-water connection to the Everglades, which was separated from the wetlands near the lagoon by at least 5 miles of flatwoods. With the inlet and subsequent construction of the Atlantic Intracoastal Waterway, Lake Worth became an estuarine environment.

The Lake Worth Lagoon today has two inlets, the large, 35-foot-deep Lake Worth Inlet at Riviera Beach, which serves ships for the Port of Palm Beach, and a much smaller and shallower opening at Boynton Beach, the South Lake Worth Inlet. Its eastern shoreline wetlands are gone, drained, filled, and developed by the 1970s. Fresh water, carrying nutrients and other urban contaminants, comes through anals from local drainage and from periodic huge releases out of Lake Okeechobee through the West Palm Beach Canal. 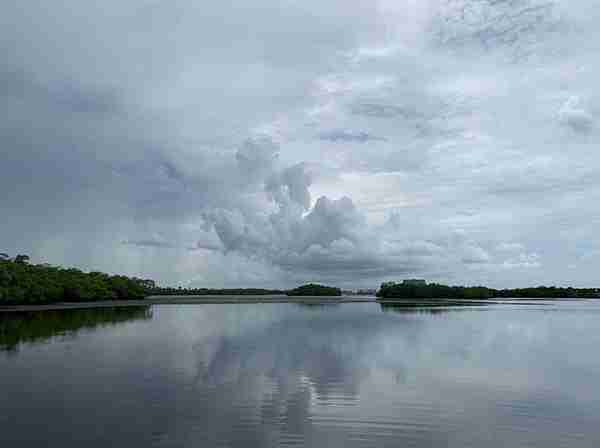 Photo courtesy of Lake Worth Waterkeeper 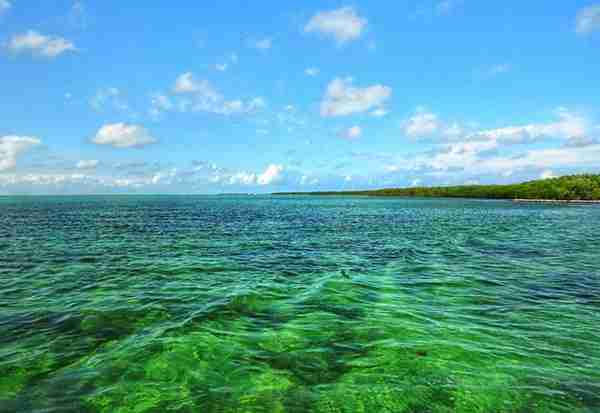 Of the five coastal ecosystems described in this chapter, Biscayne Bay was the most dependent on the Everglades in its natural, pre-drainage condition. Historically, it was a tidal estuary receiving fresh water from the Everglades over and through the Atlantic Coastal Ridge. The freshwater inputs produced estuarine salinities throughout fringing mangrove swamps and tidal creeks as well as substantially diluted salinities throughout the bay’s open waters. These estuarine habitats were important to the bay’s ecology, providing nursery conditions that produced snook, seatrout, redfish, mangrove snapper, and pink shrimp. The bay’s estuarine productivity was heavily dependent on submerged aquatic vegetation. However, development of southern Florida’s flood control system greatly altered the freshwater inputs resulting in deleterious changes to the bay’s ecology that included making most of the bay marine, not estuarine.

Overall, Biscayne Bay has transitioned from its historical character as a tidal estuary to its modern character as a marine lagoon. It still receives fresh water but much less than historically because of flood control releases farther north in the Everglades/Lake Okeechobee system. Incoming freshwater has changed from diffuse flows through wetlands, tidal creeks, springs, and groundwater seepage to dominating point-source discharges from the ends of canals. The flood control system has caused most of Biscayne Bay to have less fresh water and resulting in higher salinity, some locations frequently exceeding seawater.