The mangrove swamps in southern Florida (Lee, Collier, Monroe, and Miami–Dade counties) cover about 640 square miles, about 90% of the state’s total. Most of this area lies in Everglades National Park where there are contiguous mangrove forests from the southernmost freshwater marshes of the Everglades and Big Cypress Swamp seaward to the open waters of Florida Bay and the Gulf of Mexico (Figure 8.1). This expanse of mangrove swamps evolved because of accumulating coastal deposits of sand, marl, shell, and mangrove peat, which extended intertidal and shallow marine habitats seaward. The slowly rising sea level over the past 3,000 years, averaging only a foot per millennium (until the 1900s), provided the condition for these thick accumulations. 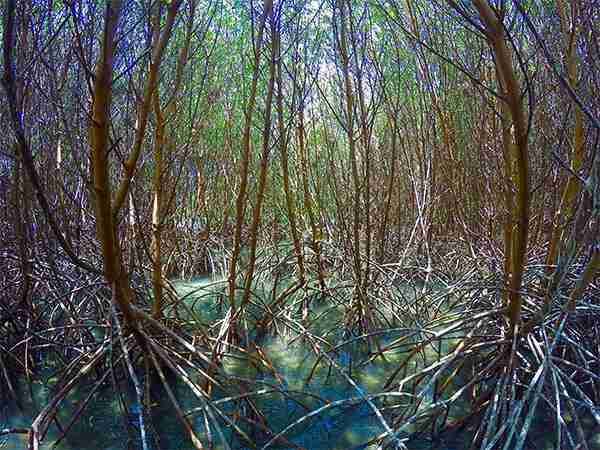 Mangroves on the St. Lucie. Photo by Dave Preston

Intertidal habitats present strong environmental stresses. They are alternately drained and flooded through tidal cycles. Salinity may vary seasonally from freshwater to hypersaline (sometimes more than twice the salinity of seawater due to evaporation in some locations), and can change radically within minutes if there is heavy rainfall at low tide. Temperatures may also vary greatly. A mangrove swamp in Florida may experience near-freezing temperatures in winter, and the surface mud may be so hot during a summer low tide that it is uncomfortable for a barefooted person to walk through open, sunny areas. Thus, the plants and animals of mangrove swamps must be adapted to a wide range of conditions.

Kinds and Characteristics of Mangroves

Identified by the development of aerial “prop” or “stilt” roots from locations sometimes many feet high on the trunk, or even from branches. These roots initially reach outward, then curve down to the soil. The roots themselves often develop prop roots, something with a half dozen successive arching tiers reaching outward from the tree. Red mangroves typically occupy the most exposed, outer locations of mangrove swamps, so prop roots provide extra support for the tree. Prop roots are also adapted to hydric soils. Because intertidal soils are continuously saturated with water, little to no atmospheric oxygen enters, rendering them anaerobic. Red mangroves do not require salt water to live, though they do much better in estuarine habitats, where seawater and freshwater mix. 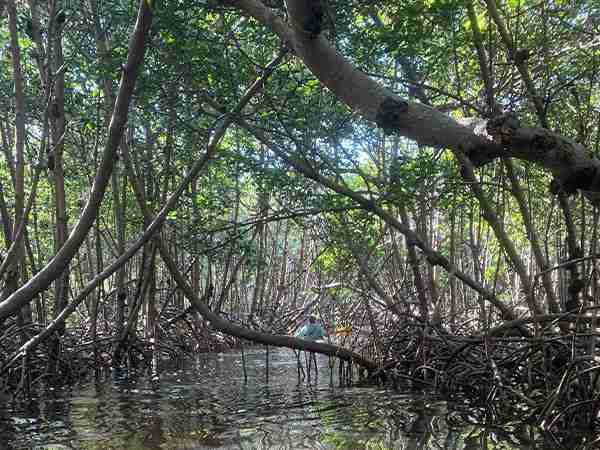 Black mangroves roots beneath the soil send small extensions upward, called pheumatophores, reaching as much as a foot above the soil surface. They function to exchange gases, and are functionally comparable to cypress knees, but are so numerous that the whole forest floor seems to be covered with them wherever black mangroves are found—mostly in the interior of mangrove swamps, where tidal action is very sluggish but shallow flooding may be prolonged. Salts are mostly excluded from entering the roots of red and white mangroves, but enter black mangrove roots. In compensation, black mangroves control internal salt concentration by excreting excess salt through tiny glands in their leaves, producing visible salt crystals on the upper surface of the leaves. 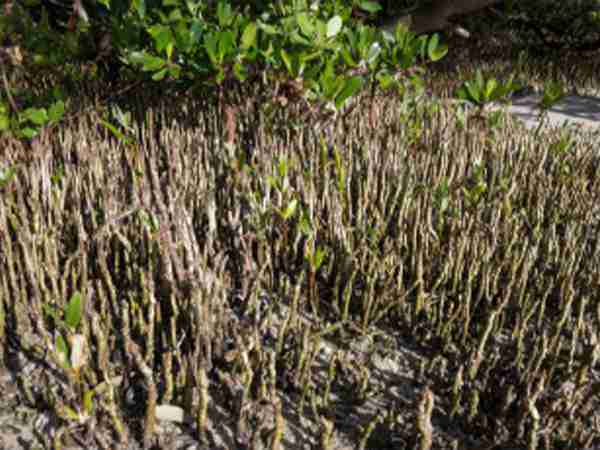 The white mangrove can occur almost anywhere in a mangrove swamp or protected shoreline, but it is most abundant in the higher elevations, such as the edges of mangrove swamps adjacent to uplands. Under stressed conditions, its roots may form short, branched pneumatophores and its lower trunk may produce small “prop” roots. Compared with the respective adaptations of the black and red mangroves, however, these growths are minor. White mangroves can colonize available upper intertidal areas rapidly, sometimes forming dense, nearly pure stands. A distinctive identifying character is two obvious gland-like openings on the petiole (leaf stem) where it meets the leaf.

Dispersal of mangroves is by floating seeds. Called propagules, seeds, mature and begin growing while stil on the tree. Each propagule develops an elongated body that becomes the trunk of the seedling. When the propagule is mature, it drops from the tree and may lodge in the soil directly, where it will begin to grow. How ever, if it does not stick, it will float, on its side first. After several days, it begins to change buoyancy and floats veritcally. Finally, after several weeks, it sinks. If, by chance during the course of its tidal travels, it becomes lodged in a calm area shallow enough for growth, it rapidly sprouts roots from the bottom and initial two leaves from the top.

Where they are protected from erosion, mangrove swamps are often soil builders. As generations of mangroves live and die, their prolific root systems and varying loads of leaf and twig litter become peat, which can rise to the level of high tides. When sea level rises slowly, as it has during the past 3,000 years, mangrove swamps can keep up with the rise and become elevated by these soil-building processes.

Mangrove swamps can be extremely productive. Given the right combination of tidal flushing (movement of water and suspended material in and out of the swamp) and freshwater runoff, mangrove swamps are among the most productive natural communities in the world. The ecological values of the mangrove swamp arise from the fate of its products: the leaves, twigs, bark, pollen, and so forth. As these materials decompose, they become food for marine life. Mangrove detritus (the dead plant debris with attached microorganisms) is eaten by many species at the base of an extensive food web, including shrimp, larval crabs, and small fish. In fact, the excellent fisheries of the Florida Keys, Florida Bay, and the eastern Gulf of Mexico owe much to the mangroves of Everglades National Park. Not only do the mangrove swamps provide a food source, but combined with the associated tidal creeks and bays, act as a nursery ground for a great many marine species.

Mangroves have been a focus of federal, state, and county legislation in Florida, most of which emanated from studies that began in the late 1960s and pointed out the great ecological benefits that mangrove swamps provide to man and wildlife alike. Mangrove swamps had long been recognized for their role in shoreline stabilization, particularly during hurricanes, because the take the initial rage of storm-tossed seas and thus protect man’s interests farther inland.