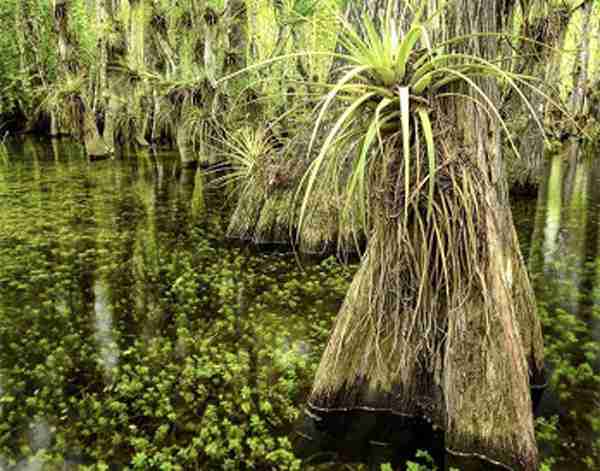 This largely forested region has a greater variety of plant communities than the Everglades. The Big Cypress has natural boundaries with the Everglades to the east and with tidal coastal communities to the southwest, but a less defined border to the west and north, and its watershed includes lands to the north. For this reason, most of the lands northward to the Caloosahatchee River are often included in “The Big Cypress” region.

Like all of southern Florida, the terrain of the Big Cypress Swamp is nearly flat, so that small variations in elevation make large differences to vegetation. Slightly higher than the Everglades, it has a maximum elevation of about 22 feet in the north, sloping almost to sea level in the south over a distance of 35 miles. More than in the Everglades, differences in elevation here are directly related to irregularities in the underlying bedrock, which greatly affect hydrology. The result is a range of plant communities from deep sloughs dotted with open ponds, to cypress swamps, to regions of countless cypress domes, to open marshes, pinelands, and hammocks. Variations in forest cover often make the region appear to have hills, in contrast to the flatness of the Everglades.

Because of its botanical, wildlife, and wilderness values, extensive areas of the Big Cypress region are now protected in the following preserves, listed generally from northwest to southeast (see Figure 7.1):

In addition to the conservation lands, two large Native American reservations lie along the northeastern edge of Big Cypress:

Courtesy of Tom Lodge from The Everglades Handbook: Understanding the Ecosystem 4th edition. Tom drew the map from several sources, with interpretation of the boundaries of the Big Cypress Swamp from Benjamin F. McPherson, 1984, in Environments of South Florida: Present and Past II, Miami Geological Society.

By far the largest conservation unit is the 1140-square-mile Big Cypress National Preserve. It was created in 1974, the result of a battle that united a broad spectrum of advocates against landowners pushing for various forms of land development. The catalyst was a 1960s plan by the Dade County Aviation Department to build an “Everglades Jetport” on 39 square miles of wetlands in the eastern Big Cypress. It was to be a reliever airport for Miami International and serve other South Florida population centers with new superhighways and high-speed rail. To avoid rising costs, the aviation department had been secretly purchasing the land for the project. After its public disclosure, I attended a presentation of the plan and heard the director of the aviation department respond to a question about environmental protection with, “Don’t worry, we’ll set aside some land for you guys with the butterfly nets.” I was not alone in my angry reaction to the callous disregard for the superlative wilderness and natural values of the Big Cypress Swamp and neighboring Everglades. The jetport project aligned former adversaries, including hunters, non-hunting conservationists, and the Miccosukee Indians. Under the influence of the Assistant Secretary of the U.S. Department of the Interior, Nathaniel Reed, President Nixon’s domestic advisor, John Ehrlichman, Florida’s governor, Reubin Askew, and a key conservationist, Joe Browder, a powerful resistance coalesced, stopping the jetport and protecting the Big Cypress Swamp. The Everglades Coalition, as well as Marjory Stoneman Douglas’ Friends of the Everglades, formed out of this controversy. Prior to being stopped, a single jetport runway had been completed in 1970. Now called the Dade–Collier Training and Transition Airport, on the eastern side of the Big Cypress National Preserve north of the Tamiami Trail. With restricted ground access, the runway is used for aircraft training. 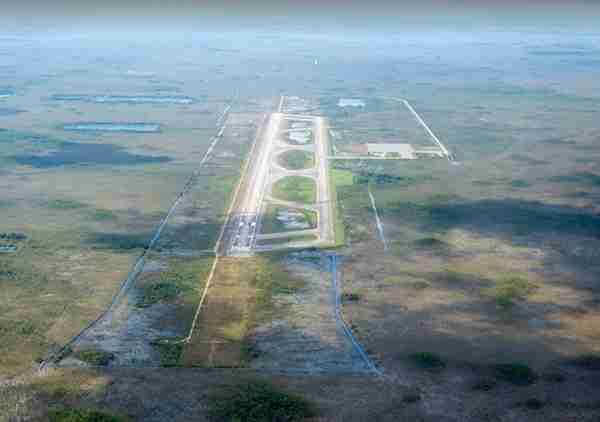 Integrity of the Big Cypress

The have been many alterations to the Big Cypress Swamp that have impacted the natural environment, including timbering of cypress and pine, plant collecting by individuals, hydrologic impacts due to drainage and development, loss of peat soil, change in fire seasonality, oil and gas extraction, and invasive nonidigenous plants and insects. In spite of these impacts, much of the region is still wild.