The awesome power of hurricanes to reshape nature—as well as man’s existence—is of obvious importance in the Everglades region. Their ecological impact can be seen in many plant communities, especially forested areas, but their effect is most prominent in the lower-elevation coastal communities, where raging winds and rapidly moving high water rearrange not only trees but also terrain. These effects, combined with a slowly rising sea level over the past several thousand years, have shaped our coastal features. Were it not for hurricanes, certain coastal habitats would not exist.

The White Zone — A Hurricane-prone Landscape

A prominent coastal landscape of the southeastern Everglades, in an area known as the Southeastern Saline Everglades, is an extensive, sparsely vegetated feature called the white zone. Coastal white zones occur in many lowland areas inland from normal tidal influence where limited freshwater flow is present, restricted mostly to sheet flow. The drainage flow-ways that do occur are limited and often discontinuous. The zone’s name comes from its very light color — a result of the high reflectance—unobstructed by vegetation—of exposed marl soil during the dry season, or of calcium carbonate particles in the community’s actively growing periphyton during the wet season.

The white zone is a nutrient-impoverished environment where vegetation is sparse and productivity of the area is notably low compared with other coastal communities. However, tides from tropical storms and hurricanes sporadically flood the white zone. With these floods come salt water and the seeds and propagules of mangroves. Thus, the soils harbor significant salt, restricting many freshwater plants, such as sawgrass, to the more inland areas of the zone. Scattered mangroves are widespread, but due to poor growth conditions, most are only 2–4 feet tall. 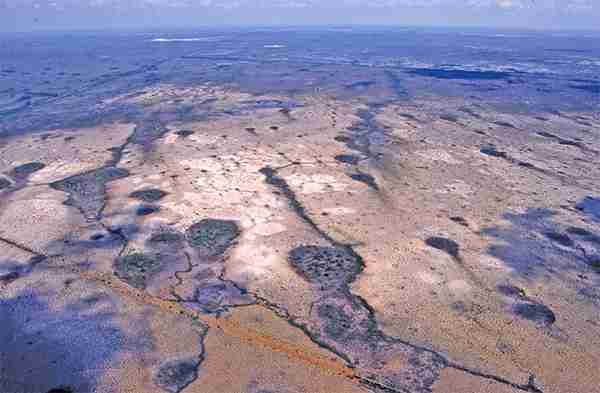