Origins of the Flora and Fauna

The tropical climate in southern Florida is demonstrated by the vegetation. The mangrove swamps and upland hammocks of the extreme southern Florida mainland support a prevalence of plants derived from the Caribbean tropics.

During the relatively recent glaciation, when the Florida peninsula was cooler and drier than today, a temperate flora thrived. The tropical flora has only invaded the region in the last 6,000 years. The warming trend following the last glacial period had apparently progressed enough by then that the climate resembled that of today, and a tropical flora began to flourish.

How did tropical plants get to southern Florida? Three modes of dispersal account for the distribution of most plants: their seeds or spores are transported by wind, water, or animals. Dispersal by animals across water is nearly always by birds.

Almost all of the tropical trees that occur naturally in southern Florida are also found in the West Indies. Most species occur in hardwood hammocks, and only a few in mangrove swamps (four species including buttonwood) and freshwater wetlands (two species). Seeds of the hammock species are commonly carried by birds.

West Indian mahogany is an example of a wind-dispersed species, having winged seeds.

The mangroves, as well as many other coastal wetland plants, have floating seeds and were dispersed to Florida via ocean currents. 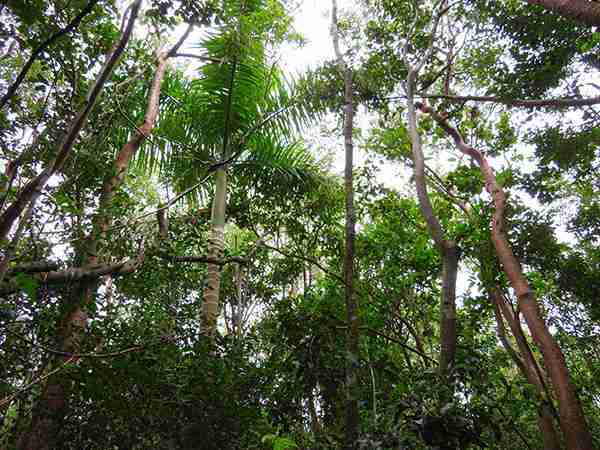 Eleven palm species are native to Florida, three of which are mostly restricted to central and northern areas. Eight occur in southern Florida, with four of these limited to rocky pinelands and the Florida keys—two known to be dispersed by the white-crowned pigeon. Thus, only four species occur in Everglades habitats, namely, the royal palm, cabbage palm, saw palmetto, and paurotis or Everglades palm. 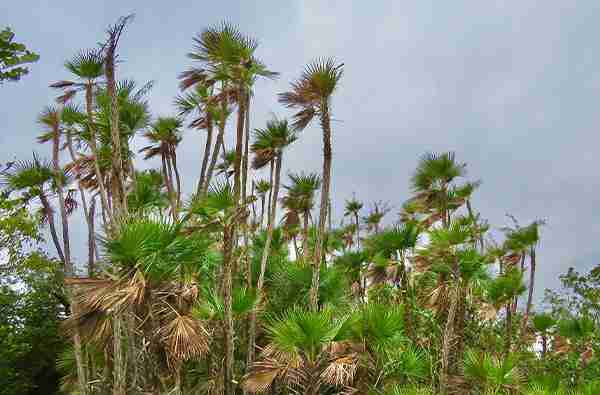 Paurotis or Everglades palms in Flamingo.

Another prominent feature of the tropical vegetation of the region is the abundance of plants that grow upon other plants: the epiphytes. Although some parasitic plants live in the region, epiphytes are not parasitic by definition, and are wind-dispersed. The region’s major epiphytes are ferns, bromeliads, and orchids. 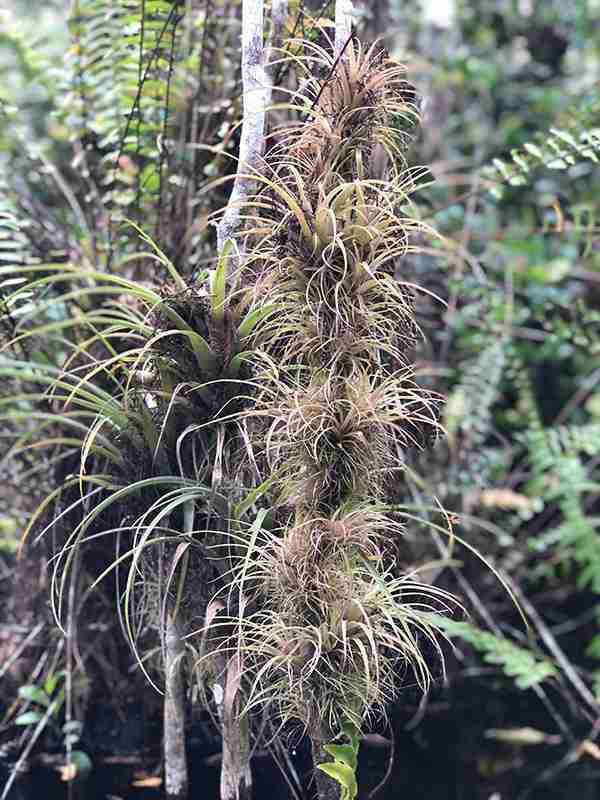 Numerous types of ferns also grow as epiphytes, particularly in very damp locations. Of about 100 species of ferns found in Florida, almost 60 are tropical species and are limited to southern Florida. In contrast to bromeliads and orchids, which generally occupy fairly well-lit sites, ferns abound even in the dense forest shade. They grow on trees with rough bark, dead logs, or rocky walls of solution holes. Ferns reproduce by spores, which are technically not seeds but serve the same purpose and are wind-blown.

South Florida’s most obvious epiphytes, the bromeliads (often called “air plants”), are relatives of the pineapple. All native bromeliads are normally epiphytic, but they may grow on the ground if they happen to fall. Most of Florida’s bromeliads are tropical, are restricted to southern Florida, and their seeds are distributed by the wind. A spectacular and common species in the Everglades region is the large cardinal airplant. Its leaves may exceed 3 feet long (although usually half that) and its small flowers are enclosed by conspicuous, attractive bracts that are usually bright red but variable in color. It blooms from January through the summer. 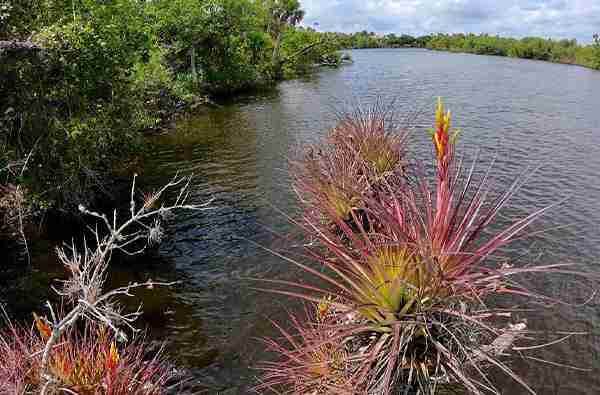 Cardinal airplants in bloom on the St. Lucie River.

Less obvious epiphytes unless they are in bloom, are the orchids. Florida harbors about 100 types of orchids; temperate, mostly terrestrial species are predominate in northern Florida and tropical species (many of which are epiphytes) are predominate in southern Florida. The most common epiphytic orchid in the region is the beautiful butterfly orchid, a tropical species that blooms primarily in the late spring and early summer. 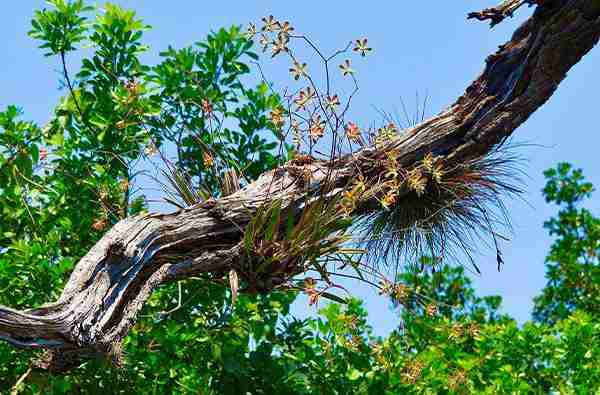 Butterfly orchid in bloom on the St. Lucie River.

All of southern Florida’s marine flora reached the region from the West Indies on ocean currents. Although many species of tropical algae occur, only six species of truly marine grasses are found, the most prominent being turtlegrass, followed by shoalweed and manateegrass. 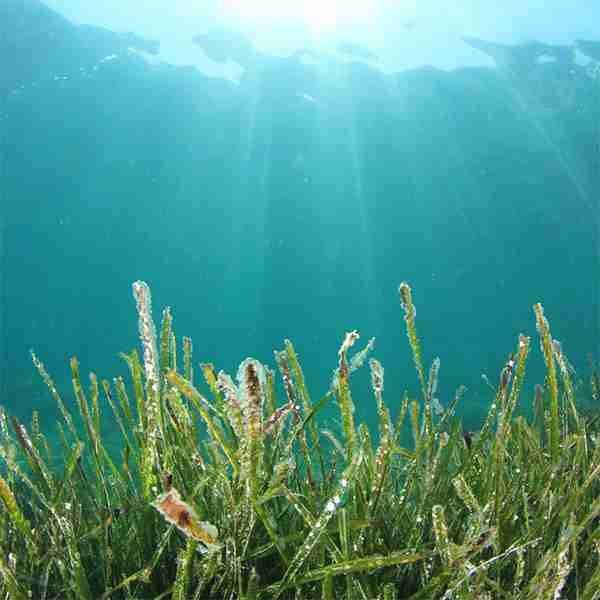 Hurricanes and tropical storms assist in the inland transport of floating seeds on storm surges, as well as carrying airborne seeds.

Origin of the Temperate Flora

How did tropical plants get to southern Florida? Three modes of dispersal account for the distribution of most plants: their seeds or spores are transported by wind, water, or animals. Dispersal by animals across water is nearly always by birds.

The temperate trees of southern Florida dispersed southward into the region by a variety of means. Bald and pond cypress have floating seeds, which enables them to spread through freshwater wetlands and streams. Southern red maple, Carolina or pop ash, and coastal plain willow have wind-blown seeds. Other species, such as Virginia live oak, sweet bay, and swamp bay have fruits and seeds that are dispersed by mammals and birds. Oaks are regularly dispersed by squirrels.

The seeds of most marsh plants are dispersed both by wind and by floating on water. The plants of the Everglades itself—the freshwater marshes—are mostly temperate. However, many of the marsh plants do not have a pronounced tropical or temperate affinity. Sawgrass, the most abundant plant of the Everglades, occurs from Virginia to Florida as well as in tropical areas of Central America and on the islands of the West Indies. Marsh plants, mostly grasses and similar herbaceous (nonwoody) species, are adapted to regular adverse conditions that may kill their top portions. Cold weather, drought, and fire are periodic rigors of the interior freshwater marshes from which the vegetation normally recovers by regrowth from the roots, which are protected in the soil. This ability to “escape” adverse conditions allows a great many herbaceous plants to be distributed across the tropical/temperate boundaries so important to woody and epiphytic plants. Thus, southern Florida has an intriguing mix of native temperate flora that has been naturally “invaded” in recent time by a great many tropical species due to unique and transitory circumstances of geography and climate. 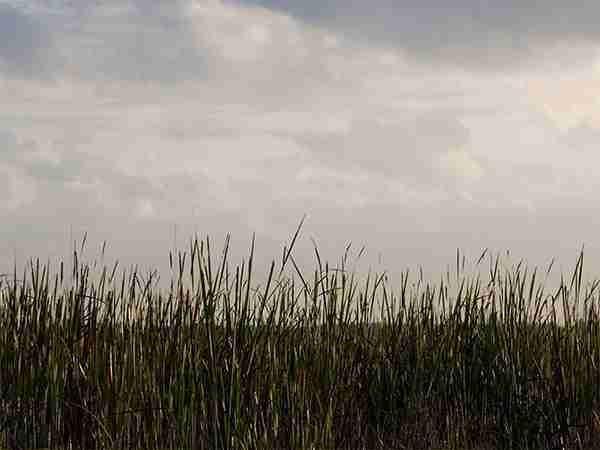