What Is (or Are) the Everglades?

The Everglades must be understood within the context of a larger region, encompassing more than just southern Florida. The Everglades lies in the south end of a watershed—an interconnected web of wetlands, creeks, ponds, rivers, and lakes— that begins as far north as the Orlando area of Central Florida. 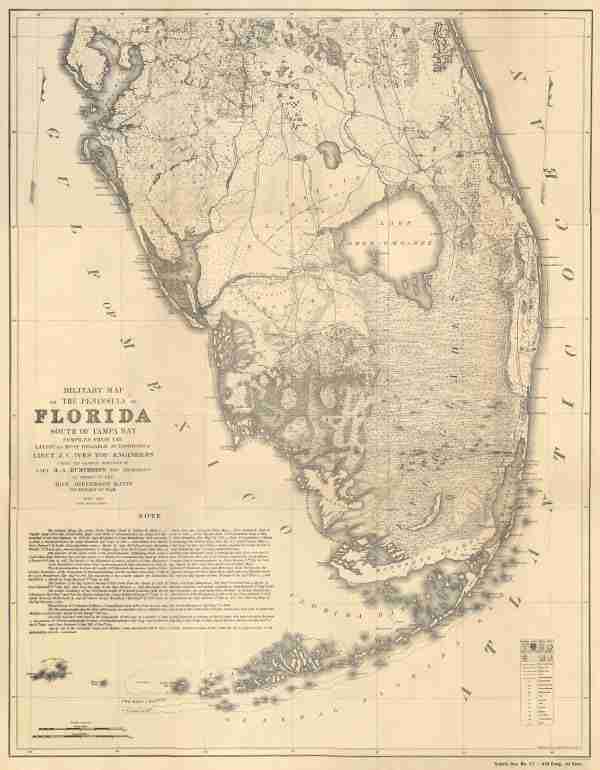 Friends of the Everglades founder and legendary author and environmentalist Marjory Stoneman Douglas described the Everglades as the “River of Grass,” and before her, the Miccosukee Indians called it Pa-hay-okee, meaning “grassy water.”

Discovery of the nature of the Everglades was slow in coming. Virtually the entire United States was mapped prior to the Everglades, as the inaccessibility of its watery wilderness inhibited exploration. Expanses of sawgrass—a plant with stiff, toothed leaves—were defiant to explorers and useless for cattle. No reasonably inviting or feasible use of the flooded land was apparent that would spur exploration. But one feature of the region’s interior intrigued people—the unexplained outpouring of fresh water around Florida’s southern coast.

Beginning in 1820, conflicts with Native Americans focused federal military attention on southern Florida, and the nature and extent of the Everglades emerged. … In 1848, a reconnaissance report by Buckingham Smith, authorized by Congress, solidified knowledge of the Everglades and Lake Okeechobee. It documented what was generally known but not recorded—that the source of water for Lake Okeechobee was primarily the Kissimmee River, and that Okeechobee overflowed into the Everglades across its southern shore. The report also touted the potential for agricultural value of the Everglades, if it could be drained.

The state of Florida contains enormous acreages of wetlands, ranging in size from tiny isolated depressions within pinelands to the vastness of the Everglades, originally about 4,000 square miles in size. But the Everglades is not special just to Florida—it is unusual in the world. Of the world’s larger wetlands, most receive their water and nutrients from associated rivers that overflow their banks. Except for the historic overflows from Lake Okeechobee, which principally affected the northern Everglades, the bulk of the Everglades receives nutrients only from the atmosphere. Thus, the configuration of the Everglades as a huge “sheet flow” ecosystem, independent of rivers or streams, is distinctive.

Once dismissed as a wasted swampland, the Everglades began to draw attention for certain values associated with it including:

Together with geology, climate and weather are the most important controlling factors that regulate any ecosystem.

The average annual rainfall in South Florida varies between 50 and 60 inches, depending upon location, with significantly more falling closer to the east coast over the Everglades. As a long term average, three-quarters of the annual total falls in the 6-month period from May through October. … The onset of the wet season is often abrupt and, as a result, water levels in the Everglades typically rise rapidly but do not reach their maximum until late in the rainy season. Trade winds influence the weather during the warm summer months, bringing a continuous supply of moist, warm air westward over the Atlantic. Localized afternoon thunderstorms with a high frequency of lightning develop daily, and are responsible for most summer rainfall.

Now consider the 6-month, winter–spring dry season, when only one-quarter of the annual rainfall occurs. From November to March, cold fronts (dry, high-pressure air) warm as they move over the Florida peninsula. With its low relative humidity, the air has a large capacity to evaporate surface water from lakes, rivers, wetlands, and vegetation. As a result, southern Florida “dries out” and water levels in the Everglades recede.

Substantial deviations from the normal dry-season regime occur as a result of the El Niño phenomenon, which occurs sporadically every 3–7 years and lasts 1–2 or more years, which bring abnormally wet and powerful extra-tropical cyclones across the southern United States, including Florida, during the winter–spring “dry” season. El Niño is also associated with reduced hurricane frequency during the summer wet season because of high-altitude easterly winds that often shear off the tops of developing hurricanes. The periodic opposite extreme, called “La Niña,” reverses these effects.

Before changes began in 1882, the entire ecosystem that included the Everglades was a watershed beginning near the present location of Orlando: the Kissimmee–Lake Okeechobee–Everglades watershed, sometimes given the acronym KLOE. Flows from the Kissimmee River and several smaller streams ended in Lake Okeechobee, from which there was no outlet during the dry season. But in normal summer rainy seasons, the water level of Lake Okeechobee rose, and upon reaching a stage of about 19 to 20 feet (above sea level), the lake merged into the Everglades with flows across its southern rim through a forest of pond apple, also called custard apple. Early explorers tried to find navigable outlets from the lake through streams leading into this swamp, which fringed the south and southeastern rim of the lake like a necklace up to 3 miles thick. All of these streams ended in a profusion of swamp forest or dense sawgrass. Beyond the ends of the short streams lay the tall, nearly impenetrable sawgrass of the northern Everglades. Sawgrass dominated the northern Everglades interior but was far from the only plant community of this vast ecosystem, which was 40 miles wide and extended almost 100 miles to the tidal waters of Florida Bay and the Gulf of Mexico. The northern Everglades “sawgrass plain” extended about 15 miles south and southeast from the pond apple swamp before giving way to a more varied landscape. Along the edges of the Everglades were more open, wet prairies that harbored a rich variety of marsh plants. Through the interior, there were deeper open-water sloughs (pronounced “slews”) with surfaces adorned by lily pads. Sloughs were bordered by a foot and a half higher “ridges” of sawgrass, and the landscape was dotted with further elevated tree islands. This mosaic covered the major portion of the Everglades, where the elongated shapes of sloughs, sawgrass ridges, and tree islands were conspicuously aligned with the southward flow of water.

Although sloughs were easy to traverse in canoes, there were no open channels through the Everglades. The water moved in a vast “sheet,” with flows perceptible to the patient, steady eye through the relatively open sloughs and, even more slowly, through sawgrass. The slope from Lake Okeechobee to tidal waters averaged less than 3 inches per mile. With higher terrain in the Big Cypress Swamp to the west and the Atlantic Coastal Ridge to the east (its highest elevations scarcely over 20 feet), the Everglades waters were guided slowly southward by the imperceptible slope of the terrain. The rate of flow, slowed by the marsh vegetation, has been measured to range from negligible to about 10 feet per minute, but averages less than a foot per minute. The depth varied considerably with seasons and years, but rarely exceeded 4 feet in the deepest marshes. Average wet-season maximum depths in the various marsh plant communities ranged between 1 and 3 feet. Throughout the entire ecosystem, the flat terrain and seasonally abundant water made small variations in topography important. Differences of a few inches in elevation cause large responses in vegetation. Ranging from freshwater marshes and tree island communities to cypress, pinelands, and upland forests, and finally to saline environments of the coast, these variations added intriguing dimensions to the landscapes of the region.