Expanses of freshwater marsh are the essence of the Everglades. The habitat and, oddly, the low productivity of these marshlands provide the values on which Everglades’ wildlife thrives. Seasonally changing water levels alternately produce and then concentrate aquatic organisms— small fish and invertebrates—making them easy targets for the ecosystem’s top predators. While the expanses of marshes often give us the impression of tranquility, they have been formed and maintained through powerful stresses imposed by water, weather, and fire.

If a single word had to be used to describe the Everglades, it would be sawgrass (officially known as Jamaica swamp sawgrass). However, many other marsh plants occur in the Everglades (Table 3.1), with well over 100 species present.

Because of South Florida’s pronounced wet and dry seasons, conditions promoting and restricting growth of various kinds of marsh plants are always at work, including the effects of excessive flooding and water flow, and the opposite, concurrent drought and fire.

The following types are generally recognizable and widely used (Figure 3.1), and each provides different ecological functions such as different animal habitats:

Sawgrass marsh (typically either dense or sparse) – not true grass but rather a member of the closely related sedge family, named for the sharp, upward-pointing teeth that line each edge of the leaf’s stiff “V” cross section. 3.4). Dense, tall sawgrass originally covered most of the northern Everglades in an unbroken expanse called the “sawgrass plain” (see Figure 1.11). There, it grew to over 10 feet tall in deep peat soils. Most of the sawgrass plain area is now in agriculture, mainly sugarcane, but some tall sawgrass remains in northern Everglades conservation areas. Dense sawgrass harbors little animal life, but is one of the habitats where alligators build their nests.

Slough (pronounced “slew”) – the deepest marsh communities that serve as the main avenues of water flow through the Everglades. The average hydroperiod is nearly 12 months and flooding may be continuous for several years. Water depth in the rainy season may be over 3 feet. These areas support an abundance of fish and invertebrates. Dominant vegetation includes submerged and floating water plants. Because of their long hydroperiod and scarce fuel (little standing vegetation), sloughs seldom if ever burn, and thus act as natural firebreaks in the Everglades.

Wet prairies (two different kinds, based on soil) – areas of marsh dominated by emergent plants other than sawgrass: 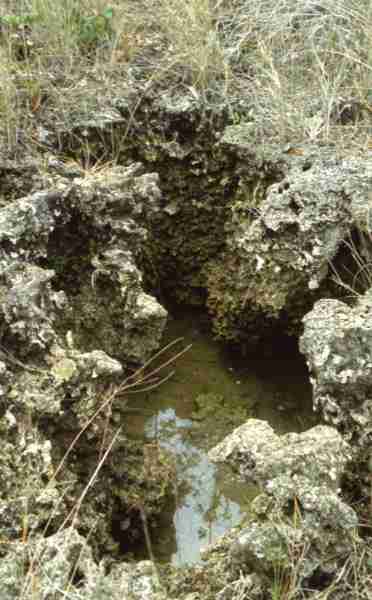 Marl prairie occurs on thin, calcitic soil over limestone bedrock which may be exposed or jagged earning it the nickname “rocky glades.” It has the shortest hydroperiod of all the Everglades marsh types making them important feeding areas for wading birds, supplying prey early in the dry season when water levels start to recede and in the early wet season when water levels when prey starts to emerge from “solution holes” upon initial flooding. Plant diversity is high. 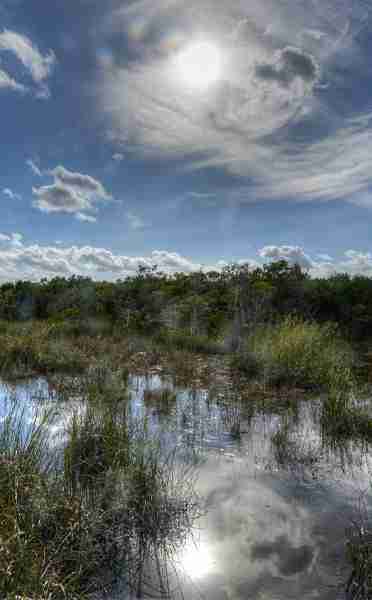 Peatland prairie is a deeper-water marsh community that occurs on peat soils and has a long hydroperiod and lower plant diversity. These areas more commonly occur in the northern and central Everglades, where they characteristically lie between sawgrass marshes and sloughs (Figure 3.7). They are important for fish and aquatic invertebrates, such as prawns, which require more permanent water and provide abundant prey for wading birds toward the end of the dry season, typically March and April. 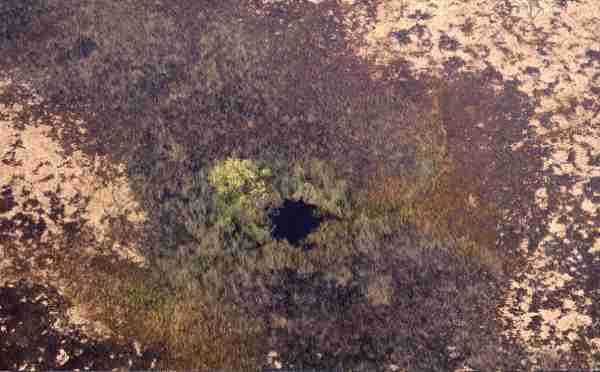 Pond (alligator hole) and creek – Small, open-water areas that are scattered through much of the Everglades. They flood continuously, except in the most severe droughts. They most probably originated where alligators excavated and existing depression, and are perpetuated by their activity making them relatively free of vegetation.

Historically, the water of the central and southern Everglades has been very low in nutrients that promote plant growth, a condition called oligotrophic by ecologists.* The low levels include nitrogen and phosphorus, which are principal components in fertilizers. Most ecosystems are nutrient limited. Of the many nutrients required by plants, the one that is in least supply relative to plant growth response is defined as the “limiting nutrient.” Forms of nitrogen or phosphorus that are usable by plants are common limitations. Very low phosphorus, at or below about 10 parts per billion (ppb) total phosphorus, has been demonstrated to be the limiting nutrient in most of the Everglades. The historic level of phosphorus in Lake Okeechobee, although limiting there also, was substantially higher, 20 ppb or more, because of natural sources of phosphorus within its watershed. The nutrient condition of the historic lake is described as eutrophic. The original swamp forest around the south shore of Lake Okeechobee and the dense, tall sawgrass of the northern Everglades sawgrass plain were probably stimulated by phosphorus from the lake’s overflow waters. In turn, these communities extracted the phosphorus, enriching the northern Everglades soils and leaving the downstream Everglades oligotrophic. Except for certain tree islands having trees large enough to extract phosphorus from the underlying limestone (see Chapter 4), the main sources of phosphorus for the central and southern Everglades were the small inputs from rainfall and airborne dust, because little arrived in the flowing water. The characteristic Everglades marsh plants thrive in this low-nutrient environment, which accounts for the rather sparse, open character of much of the marsh and for the abundant periphyton. 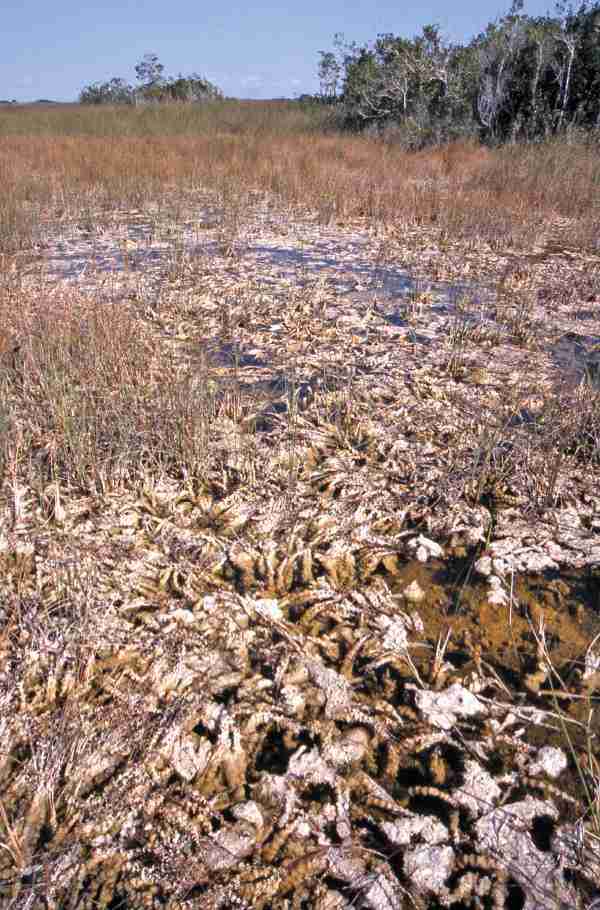 Periphyton: A plant community atop others

What typifies the Everglades is an algal community called periphyton. It is an association of many kinds of algae that covers submerged plant stems and leaves as well as soil surfaces. More than 300 species have been identified in Everglades periphyton. It is the main nutrition source for Everglades grazers including invertebrates such as grass shrimp, crayfish, snails and aquatic insects, and forage fish. Everglades Periphyton thrives in water having extremely low nutrient levels. The two main sensitivities of periphyton are water quality and hydrology. Because of these sensitivities, measured characteristics of periphyton are used as reliable indicators of water quality and hydrology throughout the United States and in other countries.

Any study of the Everglades requires an understanding of the role of fire, without which the Everglades would be very different. Fire is an important controlling agent for most habitats of southern Florida, as it is in all seasonally dry areas of the earth where lightning occurs. Without fire, wetland shrubs and trees would invade Everglades marshes, especially shorter hydroperiod communities including marl prairie and sawgrass. The process is called succession. Fire sets succession back and has the positive effect of releasing and redistributing nutrients that become “locked up” in plant tissues during their growth. Death and decay would eventually release the nutrients, but fire is faster. Thus, in the weeks following “normal” fires, new growth rejuvenates the marshes. Sawgrass marsh, for example, is perpetuated by wet-season fires.

Despite concerns about unmanaged wildfires, since the 1950s there has probably been more alteration of Everglades marshes by too little fire than by too much fire. Roads and canals act as firebreaks, reducing the spread of fires, and firefighting has traditionally endeavored to suppress or extinguish wildfires without regard to ecosystem benefits, especially (and understandably) near highways and residences. To improve this situation, wildlife and ecosystem scientists have increasingly used fire for regional natural-area management. Prescribed burning in the Everglades and Big Cypress Swamp is now an important tool in an evolving science that strives to mimic the natural effects of fire. 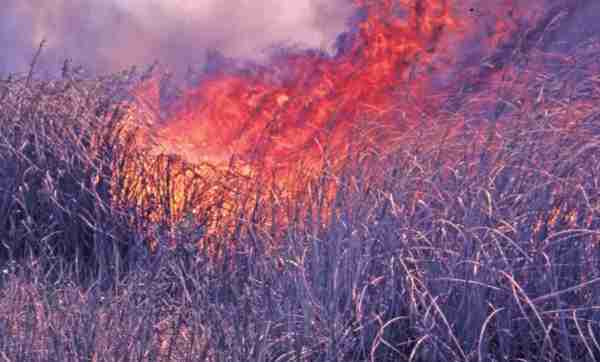 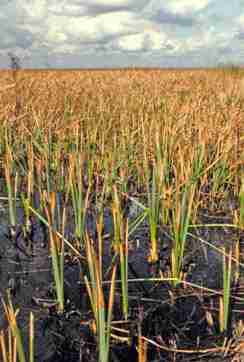 Sawgrass recovering after a wet-season fire in Water Conservation Area 3A. Photo by Tom Lodge