Section 4: Hydrology, Land Use, and the C&SF Project

Lowering the natural water levels has had by far the greatest initial impact on the integrity of the vast expanses of wetlands of the Everglades region. Early drainage efforts sought to reduce water levels for agriculture in marsh and swamplands, and secondarily to provide for navigation. There was little regard for conserving water for irrigation and potable uses as fresh water was thought to be inexhaustible. Flood control efforts focused on directing interior waters through canals to coastal tidal waters as quickly as feasible. Canals from Lake Okeechobee were constructed through the Everglades to the Atlantic Ocean, which not only lowered Lake Okeechobee and partially drained the Everglades, but also interrupted the original flow pattern of the Everglades. Within a few decades, uncontrolled drainage brought many problems. In dry years, most notably during an intense drought in 1944–1945, many water supply wells were ruined by saltwater intrusion into former freshwater aquifers. Drying of the peat soils caused subsidence of 1–5 feet over large areas and fostered uncontrollable soil fires with their attendant, choking smoke. Alternatively, the system had insufficient capacity to prevent flooding in very wet years such as 1947.

It was the excessive flooding in 1947 that convinced Congress to act on plans that had been developing but awaited such an emergency. In 1948, the Central and Southern Florida Project for Flood Control and Other Purposes (C&SF Project) was authorized. Changing flood control to water management, the C&SF Project was comprehensive, addressing flooding, water supply, saltwater intrusion, agricultural expansion, and land development for residential, commercial, and industrial uses of urban landscapes. It also sought to protect the remaining Everglades, as understood from the engineering perspective of “contain and control.” Implementation began in the early 1950s and was essentially complete by 1973.

Everglades Features of the C&SF Project

Within the Everglades, the C&SF Project had four main components. The northernmost was the Everglades Agricultural Area (EAA), it’s modern features shown on Figure 22.1. Only a portion near the lake had previously been developed, leaving much room for agricultural expansion in what had been a vast, nearly unbroken expanse of sawgrass, “the sawgrass plain.” Except for two large tracts used for wildlife management — the Rotenberger and Holey Land Wildlife Management Areas — all of this area eventually became used for agriculture, primarily sugarcane until areas were converted into stormwater treatment areas. The EAA encompassed about 27% of the historic Everglades and was a major factor in the economic justification of the C&SF Project.

The second major feature was a flood control levee — the eastern perimeter levee. It extended south from the EAA and was constructed in segments through the eastern Everglades. When finished, it defined a new, artificial eastern edge of the Everglades, serving to block surface flow so that the low-lying lands eastward to the Atlantic Coastal Ridge would be protected from direct Everglades flooding (but still required a system of drainage canals).

A third major feature was water conservation — the primary designated use for most of the remaining Everglades between the EAA and the Tamiami Trail. This area was divided into three huge Water Conservation Areas (WCAs)—Everglades impoundments—encompassing 32% of the historic Everglades.

The fourth feature of the C&SF Project was the enlargement of the overall canal system into a more interconnecting network, and the installation of the pumps and control gates, such as those for the WCAs, to completely regulate the waters of the system. The canals and water management structures also included control gates and pumps around Lake Okeechobee, enlargement of the Caloosahatchee and St. Lucie canals, and alterations throughout the Kissimmee watershed. The overall primary C&SF Project system now includes about 1,000 miles each of canals and levees, over 150 water control structures, and 16 major pump stations. 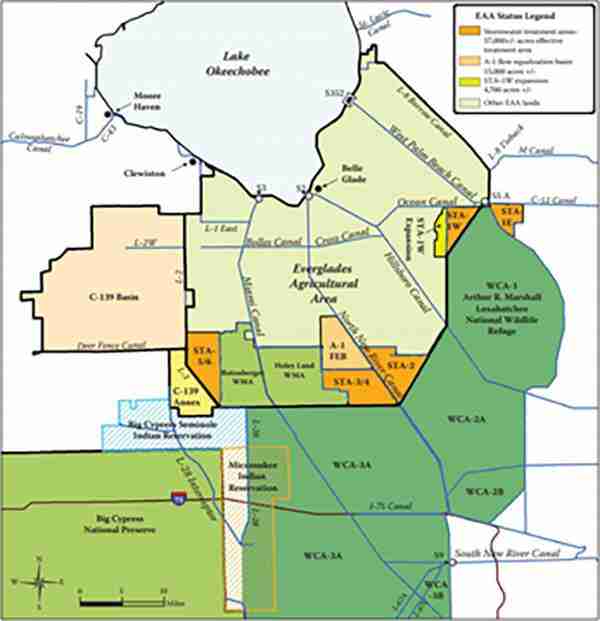 From an ecological standpoint, the C&SF Project fragmented the northern and central Everglades into impoundments where the natural wetland environments deteriorated and, without knowing how much water was needed, management of the project directed too little to the Everglades National Park. Alternatively, the C&SF Project had a profound effect on human existence in southeastern Florida, making land development safe and inviting. While it adversely controlled nature, its design was thought to protect huge areas in a natural state in water conservation areas, widely perceived to be the engineering solution to saving the dwindling Everglades.