Email records prove that a U.S. Sugar lobbyist has been directing policy at a state agency. 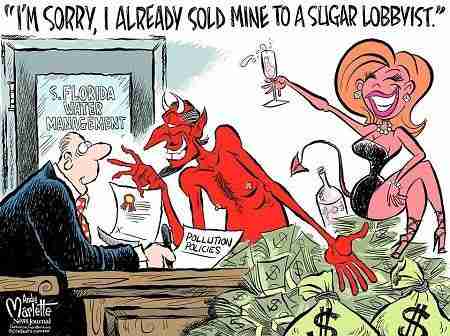 Just days ago Michael Grunwald, author of The Swamp and the leading expert on Everglades politics pretended not to know this, telling CBS4’s Jim DeFede: “They’re not the ones making the decisions.”

It turns out they absolutely are the ones making the decisions, and Grunwald knows better. The industry has been getting a pass from journalists on a foundational lie: that sugar is operating in good faith, doing its part to solve Florida’s water management crises.

DeFede’s documentary, The Everglades: Where Money, Politics, and Race Collide, never really challenges that lie, and so it’s a confused jumble of lesser untruths, truths, and half-truths. It follows a sad tradition of blaming everyone and no one for a problem too complex to solve.

In other words, the red herring strategy worked. Allowed to position itself as an honest partner in the search for a solution, the sugar industry famously funds misinformation campaigns to distract from its responsibility for South Florida’s water crises. DeFede repeats just about all of them, including the following red herrings:

Could DeFede have demanded the straight-up truth? Refused to entertain the evasion and lies and pressed for answers on why the sugar industry won’t help cut toxic discharges or restore freshwater to the Everglades? No. Not without challenging the foundational lie that sugar’s working as hard as the rest of us to solve these problems.

Of course TC Palm’s reporting shows what most of us already knew: The industry has never worked in good faith to fix Florida’s plumbing. And they won’t. As Grunwald told DeFede, “So much of the system is managed for their benefit.” Sugar doesn’t want to fix it–for them, it’s all working just fine.

That can change. This year Joe Negron and the Florida legislature delivered a chance–a slim chance–to defy the sugar industry and restore the Everglades and our waterways. It can work. But only if we confront the truth about sugar’s opposition to the solution.

P.S. Bullsugar.org supporters are making a difference and winning over lawmakers to reform Florida’s water management policies. If you can, please join them and click here to make a donation for a clean water future.