Among the wading birds you are most likely to see often in south Florida is the White Ibis. They seem to be everywhere – which is both a new thing and an old thing. It is an old thing, because White Ibis are and always have been the most abundant wading bird in the Everglades. If any bird were to be emblematic of the magnitude of wildlife that once found homes in the Everglades and nearby southern Florida it would be this one. It typicality has not gone unappreciated locally, it is the University of Miami’s mascot (a hurricane not being sufficiently cuddly for a mascot).

The White Ibis is a modestly sized wading bird, weighing a couple pounds. It is white as an adult but brown on top as a juvenile, turning white before its first birthday. Its bill, exceptionally long and down-curved, is used to probe the mud, water or soil, as if it were giant tweezers. Anything caught between the tips is tossed back into the gullet with a quick head flip and probing resumes. They walk along in very shallow water or even on land, probing as they go. This is not a technique that’s good for fishing, as most seem to be able to avoid the probe. Rather the technique catches slow moving animals such as crustaceans, larval insects, worms, and snails. So unlike the Wood Stork, which is also a non-visual prober but specializes in catching fish, the White Ibis eats invertebrates, most especially crayfish in fresh water and small crabs along the coast. And unlike the Wood Stork, it is not so dependent on falling water levels to concentrate its prey. Mostly it just likes the water shallow enough to wade about, but doesn’t mind probing in lawns either. But it does like company, and moves about in flocks that can number in the hundreds. The success of the ibis in the Everglades may be attributed to such tendencies as flocking (a help in both finding feeding sites and stirring food up), nesting in tight colonies, moving around nomadically if needed to find areas appropriate for nesting and feeding, nesting at nearly any time between spring and late fall, and feeding in many situations – on falling water levels, rising water levels, stable water levels, and even out of the water on soft dirt.

If one were to compare birds within a flock closely, it can be seen that they are quite dimorphic, the male’s bill being half again as long as the female’s. This is all the better to the defend the nest site with, which is a skill much needed as they nest tightly together in colonies, and males are not above pilfering nest materials or even trying to mate with neighboring females. During nesting the otherwise pinkish bills become bright red, as does the face and throat that in males is inflated to the size of a ping pong ball during courtship. Although a bird of the Everglades, the White Ibis has a very extensive range throughout southern North America and into South America, where its place is taken by the very similar Scarlet Ibis that differs mostly only in being all red instead of all white.

As the White Ibis in the Everglades, lines of Scarlet Ibis can fill the skies of a Venezuelan Llanos or Brazilian Pantanal sunset.

One cannot read much about the Everglades without coming into contact with statements about the numbers of wading birds that used to be. There was a time when it was thought that these were in the millions, but there is no proof of that and thinking in these numbers gets expectations confused. In fact the best that can be done for ‘historical’ numbers is from about the 1960’s through 1980’s. These numbers for all wading birds are in the high tens, and maybe low hundred, thousand. What is a fact, is that whatever the historic numbers of Everglades wading birds really were, they were for the most part White Ibises. 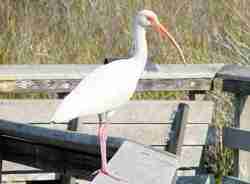 That is the old part. The new part is that in recent decades the White Ibis has become more and more of a suburban, even an urban bird. Where to go to see them? Almost anywhere – the Florida Keys, Homestead, Redlands, Naples, road margins, artificial ponds, downtown Miami, and, yes, at the University of Miami campus (where the mascot came long before the real birds). A good example of the current situation is at Key Biscayne where over a thousand nest annually on a small island at Crandon Park while feeding all over nearby the yards and parks and even flying to and past Miami to feeding sites. You can watch the evening flight lines of ibis from urban Miami along the Causeway out to the Key. The White Ibis is now an urban bird – a testimony to its adaptiveness.

We can appreciate the resilience of the species and appreciate its beauty as it now graces our yards, but is there not something amiss here as well? Why is it that these birds are not out nesting in the Everglades as they use to? Some are for sure, and it is still the most abundant nesting species in the interior marshes. But it is not likely that the urban situation is so wonderful that it just compelled them to take up residence there. Rather it is a sign that the situation in the Everglades is not to their liking, and that overall some can do better in backyards. White Ibis is inherently a nomad, moving about from year to year as it finds conditions that are suitable to its nesting. A sure sign of the Everglades’ restoration will be when the White Ibis again is nesting in the tens of thousands each year at changing sites within the Everglades. In the meantime, we can enjoy the spectacle of the emblematic bird of Everglades wildlife in our yards, and wonder what comes next for the Everglades and its wildlife.