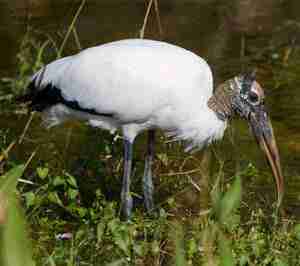 If wading around in a swamp with your head under water seems like a hard way to make a living, it is. But this is the way of the Wood Stork. And it is this very specialized way of living that makes the Wood Stork one of the most incisive indicators of how well the Everglades is functioning. From the Stork’s point of view, recently this functioning has not gone well at all. The Wood Stork has a lot going against it. It is a very big bird and so needs a lot of food, And it needs this food over the long time (3 -4 months) it takes to nest. It feeds entirely tactilely, that is without using its vision, by groping along in the shallow water bill agape in anticipation of the bill running into something it can eat. That something mostly is relatively large, slow moving fish. When such a fish bumps into the bill, it closes with astonishing speed (measured at 25 milliseconds). Yet this technique is sufficiently effective to capture enough food to supply an adult and its ravenous nestlings only when such fish are highly concentrated. In the Everglades, fish concentrate during the drying season as they retreat from drying marshes to still-wet marshes or ponds. So what all this means is that for the Wood Stork to nest successfully, it needs large fish concentrated in high densities by water levels receding over a sufficiently long period of time to nest and in a succession of places accessible from the colony site.

Once upon a time, Wood Storks nested in the thousands in the southern Everglades and Big Cypress Swamp (about 4000 pairs or so in Everglades National Park), and they did so in most years, beginning in early winter so as to be completed before the spring rainy season raised water levels and dispersed the fish again. But all this has changed. Hundreds to about a thousand pairs nest in the southern Everglades and Big Cypress Swamp and are hardly ever very successful. Many of the remaining South Florida storks have shifted to colony sites further northward in the Everglades to take advantage of drying situations formed by the levee and canal systems that now control the dispersion of water. And they now begin to nest much later, usually leaving insufficient time to finish before the rainy season begins. These days it often takes only a single reversal of the drying trend to cause the storks to abandon their young. And rainy patches are not uncommon within the dry season as late winter frontal systems push into southern Florida. And it is not for lack of trying, as storks under pressure readily will travel as many as 50 miles to find food, soaring with little energy expenditure on rising air currents, and even staying overnight to fly back to their chicks when thermals develop again the next morning. But in the present compartmentalized Everglades there seem to be fewer situations under which storks can begin nesting on time and continue to catch sufficient food for sufficient periods of time and in convenient places to nest successfully. 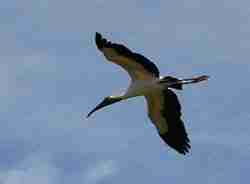 While drastically declining in numbers over the past several decades as a breeding bird in southern Florida, the Wood Stork as a species is not doing all that badly. Coincident with the Everglades degrading, the Wood Stork slowly shifted the core of its North American population north of the Everglades, both in Florida and states further north. Many of these storks visit South Florida in winter, but do not stay to nest. With a current United States nesting population of about 4-6000 pairs and in recognition of its population decreases especially in southern Florida, it is Federally listed as endangered. But the species is found in tens of thousands elsewhere in the swamps and marshes of Central and South America. There it occurs with the two other American storks, the even larger Jabiru and the Maguari, a species more like the European White Stork. So it is not the Wood Stork as a species that is so much of a concern, but what it tells us about how the Everglades no longer functioning.

The Everglades was a remarkably large wetland, over 100 miles long and up to 40 miles wide. In wet season its water flowed ever so slowly along the gradient of its main axis of about an inch per mile from Lake Okeechobee to Florida Bay and the Gulf of Mexico. Land surface gradients were steeper along its lateral edges from coastal ridges into the Everglades slough. So in most years as the dry season progressed, the marsh dried more or less from the highest to the lowest elevations, from the top to the bottom, from the sides to the center. And it probably didn’t happen exactly the same way every year, as some years had lots of rain, others little. Some years had an extensive and prolonged dry season, others were wetter. Some areas experienced local rainfall events or droughts that effected how the Glades dried. But overall, storks nesting in the southern Everglades (in general one of the last place to dry and so producing fish concentrations close to the colony when energy demand was greatest) had sufficient stimuli to nest early and sufficient food available over a long enough period of time to nest successfully. Their current dependence on relatively rapid water level declines, their adverse reaction to water level rises within the drying season, and an apparent paucity of alternative places to feed when things go bad locally suggest how complicated being a Wood Stork in the man-altered Everglades has become. Realizing that the Everglades is still a huge expanse of wetland (half of its areal extent still remains), surely there is enough fish for thousands of Wood Storks to nest successfully, if only it were made available to them in the ways it used to be.

This is why the situation of the Wood Stork is so emblematic of a degraded Everglades and conversely of a restored Everglades. If water flows, water depths fluctuate, fish populations develop, and concentrating patterns occur in a manner sufficient for Wood Storks to again nest successfully in the thousands and with regularity in the southern Everglades, much will have been achieved in making the Everglades as it once was. If Wood Storks continue to avoid nesting in the southern Everglades and when they do try to nest continue to fail, then so does the Everglades.