An administrative law judge has ruled against Miami-Dade County’s proposed SR-836 extension outside of Miami-Dade County’s Urban Development Boundary (UDB) intruding into the Everglades. The ruling clearly is the death knell for the planned 14-mile, 6-lane toll road. The sole justification for the tollway – that it would improve congestion – was flatly rejected based on the evidence. Therefore, we expect Governor DeSantis and the Florida Cabinet to put an end to this ill-advised project. 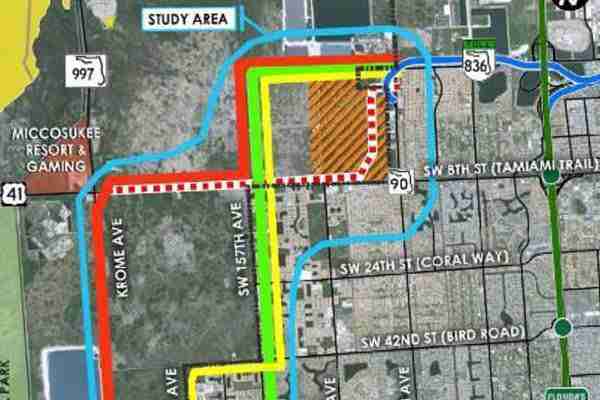 The administrative law judge’s ruling is a victory for Tropical Audubon Society (TAS) and Miami-Dade County resident Michelle Garcia, who challenged the Miami-Dade Expressway Authority’s plan for the tollway extension as inconsistent with state land use planning laws and Miami-Dade County’s own land use plan. The Hold the Line Coalition, Friends of the Everglades and 1000 Friends of Florida have provided substantial support to this successful legal effort to oppose the proposed tollway extension into these scarce and strategically located farms and wetlands in southwestern Miami-Dade County.

The Administrative Law Judge ruled that the changes to the County’s comprehensive plan to allow the tollway violate the law because:

* Placing the tollway outside of the UDB is inconsistent with the purpose of the UDB, and the overarching intent of the Plan to achieve a compact urban development form while protecting natural resources and agriculture by discouraging urban infrastructure outside the UDB.

* The tollway will traverse the Pennsuco wetlands, which are protected under the CDMP.

* The Plan Amendment is inconsistent with the County’s requirement to protect the Pensucco wetlands, an area designated as critical habitat for the threatened and endangered species.

* The new tollway will not ease congestion. The Judge found:

“Not only does the data reveal that the improvements in West Kendall congestion would be … ‘meager,’ …they provide no support for a finding that the Plan Amendment will … improve[e] the commute time to downtown and other employment centers.”

* The study the County relied on to claim the tollway will improve commute times to the airport and other employment center does not prove any such benefit.

* The tollway would actually worsen traffic congestion on SR 836, and thus:

“commuters will drive 13 miles, outside of the UDB, through active agricultural lands, through environmentally-sensitive lands, and through the West Wellfield, only to connect with the existing expressway operating at [a level of service] lower than it operates at today.”

* The tollway violates the County policy to “shift the travel mode” in this part of the County “from single occupancy vehicle to mass transit.”

* No data or analysis supports that the mass transit option to be located alongside the corridor would be used.

* The Judge found that the new tollway “creates a risk of contamination to the wellfield” and that the plan amendment violates the County’s requirement to “protect and enhance” wellfields.

The ruling, which is attached, recommends that Florida Governor Ron DeSantis and the Florida Cabinet issue a final order ruling that the tollway proposal violates state planning law.

Attorney Paul Schwiep, of the Coffey Burlington firm in Coconut Grove, representing the Petitioners, said: “Today’s ruling exposed the claimed transportation benefits of the tollway as being completely unsupported by the evidence. The petitioners call upon the Miami-Dade County Commission, the Miami-Dade County Expressway Authority, the Governor and Cabinet and state lawmakers to drop this outdated and ill-suited approach to our modern transportation needs. It has now been made clear that no further tax or tollway funds should be wasted pursuing this ill-advised project.”

Attorney Richard Grosso, also representing the Petitioners, said: “As we’ve been arguing for over a year, the law judge found the facts do not support the claim that the tollway is consistent with Everglades Restoration. Beyond today’s ruling, the proposed tollway should not qualify for the federal wetland and endangered species permits it would require. “The days of building roads through the Everglades should now over.”

Tropical Audubon Society President José Francisco Barros observed: “This ruling is a win for Miami-Dade County residents, Everglades Restoration, our drinking water supply, and crucial habitat for birds and other wildlife. The decision respects the County Comprehensive Development Master Plan and ensures that we can protect lands designated for Everglades Restoration. We ask the Governor and Cabinet to uphold this important ruling.”

Resident Michelle Garcia, who lives in the area near the proposed new toll road, noted: “It is important to alleviate traffic for West Kendall residents but the data does not support that this 14- mile tollway would accomplish that goal. We need 21st-century transit options! All this road would do for anyone who lives close to it is increase traffic, noise and congestion near to our homes. I’d like to see our leaders pivot, focus on real solutions to traffic in my area and make decisions based on science for the benefit of all the residents of Miami-Dade County. The $1 Billion dollars that would have been spent on this road should be spent on modern, mass transit.”

Laura Reynolds representing the Hold the Line Coalition and Friends of the Everglades said: “We are proud to be part of the team that protected the public interest and the Everglades. The judge’s ruling has restored my faith in our system. We could not have done any of this work without the lawyers, experts, non-profits and support staff who all worked largely pro-bono to achieve this victory. Special thank you to Coffey Burlington Attorneys at Law, Richard Grosso, Paul Schwiep, Christopher McVoy, Thomas Hawkins, José Francisco Barros, Juan Mullerat, Michelle Garcia, Zac Cosner and Walter Kulash. I hope Miamians will consider supporting the non-profits that have made this effort possible — without each of them Miami-Dade County would be heading in the wrong direction.”

Founded in 1947, Tropical Audubon Society endeavors to conserve and restore natural South Florida ecosystems, focusing on birds, other wildlife and their habitats through advocacy and education for the benefit of biological diversity and humanity itself. Learn more at www.tropicalaudubon.org.

Founded in 1969, Friends of the Everglades compels government agencies to comply with existing environmental laws, encourages politicians to recognize the long consequences of their actions and spreads awareness of the importance of the Everglades to the South Florida ecosystem. Learn more at www.everglades.org.

Founded in 1986, 1000 Friends of Florida’s experienced staff has partnered with citizens, community and state leaders, conservation and business groups and others to promote a more sustainable future for one of the fastest growing states in the nation. Learn more at www.1000fof.org