Succession is the process of change from one plant community into another as a result of environmental circumstances. For example, a pineland in southern Florida changes into a tropical hardwood hammock without fire, a normal successional sequence. However, with regular fire, the process is set back—succession is stopped—and pineland is maintained.

Successional relationships exist in all South Florida plan communities. At the bottom are permanently flooded communities. Freshwater areas will lead to sawgrass and related shallow wetlands, and marine or estuarine areas will lead to mangrove swamps. At the top are hypothetical uplands without vegetation. Both examples of soil types and conditions lead to pinelands. Slash pine forests would dominate moist locations, while sand pines would dominate dry, well-drained soils of ancient sand dunes peripheral to the Everglades.

Green plants form the base of food chains. In that role, they are called primary producers by ecologists. Green plants use sunlight in photosynthesis, initially to split water into hydrogen and oxygen, a reaction that requires energy. “Reduced” hydrogen is incorporated into energy-containing substances that drive the biochemistry of plant growth and produce energy-storing substances such as sugars, which can also be linked together to form cellulose, a major plant structural material. Oxygen is a waste product of the photosynthetic process. Each of the food chain steps is called a trophic level. Green plants (trophic level one) become the food of herbivores (trophic level two), also known as primary consumers. Herbivores consume plants for their growth and reproduction, and themselves become the prey of carnivores (trophic level three), or secondary consumers. Lower carnivores become the prey of higher carnivores (trophic level four and higher) in the food chain, which may have more levels ending in “top” carnivores. Dead material, including whole organisms, fecal material, and sloughed-off fragments such as hair and skin, become detritus, which is energy-containing material available to decomposers—bacteria and fungi. The preponderance of detritus is plant remains, either whole plants or plant parts such as twigs, leaves, flowers, dead seeds, and roots. Bacteria and fungi are the principal organisms that use detritus as a food source.

As a generalization, only about 10% of the energy of each trophic level is transferred to the next level. About 90% is lost in the effort expended in finding food, digestion, growth, reproduction, and other work. 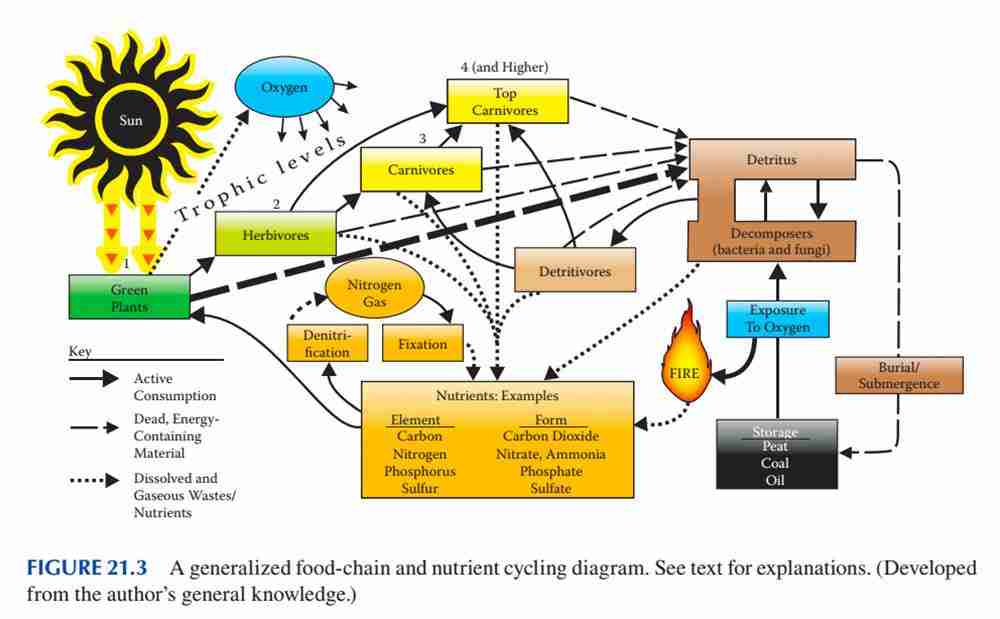 Inadequately shown in the figure is the reality that animal species are seldom confined to a specific trophic level. Herbivores, for example, are opportunistic carnivores.

Using the term food web instead of food chain emphasizes the multiple trophic pathways of real life. Larval amphibians, for example, (tadpoles or pollywogs) are mostly herbivores but are also known for cannibalism. Upon transferring to adult frogs, they become strictly carnivores so a food web diagram would need to show larval and adult frogs separately. 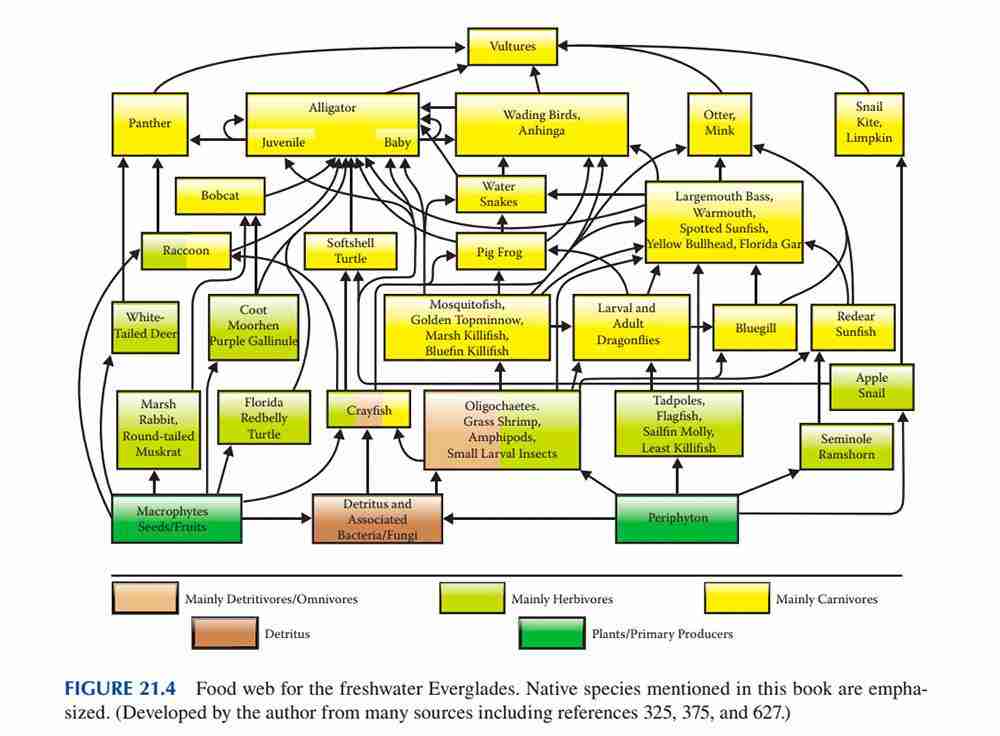 As a critical step in Everglades restoration, non-quantitative conceptual ecological models (CEMs) were developed for 11 physiographic regions of South Florida. They identify the major human influenced “drivers,” the resulting “stressors” on these systems, the “effects” that the stressors cause, and the major ecosystem “attributes” that may be changed as a result.582 Depicted geographically in Figure 21.7, the 11 regional models are (in the order of their reference numbers in the current section title): (1) the Caloosahatchee estuary (lower Caloosahatchee and lower Charlotte Harbor), (2) Biscayne Bay (including Card and Barnes sounds), (3) the Lake Worth Lagoon (including its watershed), (4) mangrove estuaries (that receive flows from the Everglades), (5) southern marl prairies, (6) the Big Cypress region, (7) Lake Okeechobee, (8) Everglades ridge and slough, (9) Florida Bay, (10) the St. Lucie Estuary and Indian River Lagoon, and (11) the Loxahatchee watershed. These models are the scientific underpinnings for understanding what is required to achieve restoration success, and have been used in the development of performance measures for restoration. Like any product of science, these models are not “cast in stone” but subject to new findings and reevaluation. 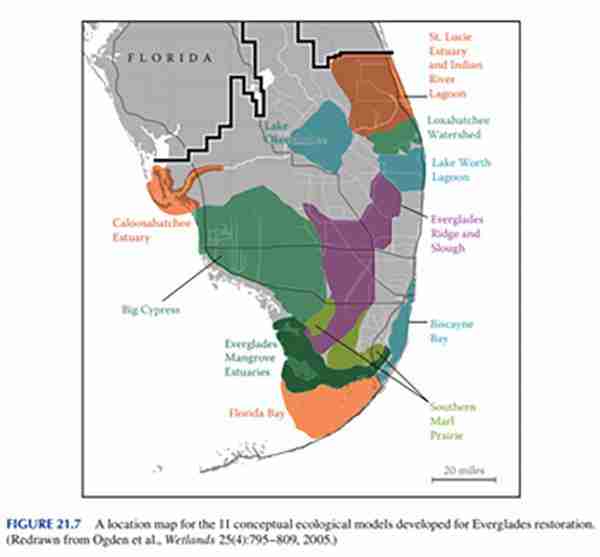 For its role in water supply and flood control, the South Florida Water Management District (SFWMD) began developing a regional hydrologic simulation computer model in the 1970s. It was critical to understand and forecast water movement, levels, and storage in the SFWMD’s complex system of canals, gates, culverts, flooded lands, impoundments, and lakes, the largest being Lake Okeechobee. The unique circumstances in South Florida are the flatness of the region, the high transmissivity of its surficial aquifers, the complexity of its coastal regions, and the extensive interconnected system of canals, levees, water control structures, and pump stations that had been built, so that models being developed for other parts of the world were not suitable. With rising concern for restoring the deteriorating Everglades, federal agencies, including the U.S. Army Corps of Engineers (USACE), the National Park Service (NPS), and the U.S. Geological Survey (USGS) joined in the development of hydrologic models. The South Florida Water Management Model (SFWMM) began providing useful output for decision makers in 1983.