In contrast with amphibians, many reptiles can tolerate salt water and dry conditions. Their ability to get along without a regular supply of drinking water far exceeds that of amphibians. A major factor in this independence from water is the reptilian egg, its hard shell, and internal organization, allowing for incubation away from water.

Reptilian tolerances for salt water and drought confer a superior potential over amphibians for crossing geographic barriers, but terrestrial and freshwater reptiles are still constrained by relatively small expanses of ocean. Thus, nearly all native terrestrial and freshwater reptiles of the region came from the temperate landmass of North America, just as freshwater fishes and amphibians did. Like those groups, numerous tropical exotic reptiles have been introduced by man. The most notable is the huge Burmese python, escaped from the pet trade and now widely established in Everglades National Park. 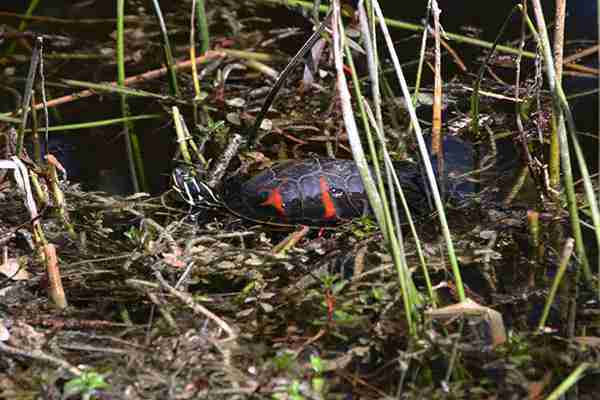 Reptiles of the Everglades Region 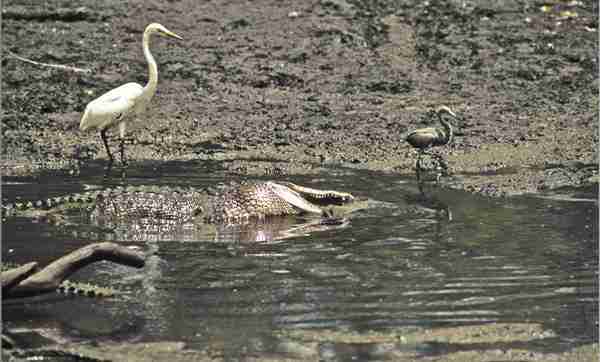 An alligator forages in a drying gator hole at Corkscrew Swamp Sanctuary. Photo by Tom Lodge

The alligator is the most important species in the Everglades, known as a “keystone” species. The largest alligator ever known were about 17 feet long, but alligators in the Everglades are not known for their large size compared with records from the rivers farther north in Florida. They are both important predators and prey — eggs and baby gators providing food for raccoons, large water snakes, otters, and wading birds, while gators over 6 feet long begin to take birds and mammals, turtles and snakes.

Found throughout all of Florida, its numbers have been reduced by land development, especially the draining of wetlands, and in the past, by hunting for gator skins and meat.

Alligators are pond builders. Given a depressed wetland area during low water, alligators dig up vegetation and soil, piling the material around the edge, expanding the depression, and creating a pond called an alligator hole. It is well established that alligator holes are important to the success of the Everglades as a haven for waterbirds. The relationship between alligator holes and wading birds is tied to the seasonal cycle of rainfall. In the late dry season, during April and May in normal years, when vast areas of the Everglades become dry, gator holes act as refugia for aquatic life. Fish, frogs, turtles, water snakes, and other wildlife inhabit the ponds and use the alligator trails for access. Many become food for the resident gator, but they are also food for herons, egrets, ibis, storks, and anhingas. Furthermore, only in very severe droughts do the gator ponds become completely dry. Thus, some aquatic life normally remains to “seed” new cycles of life when water levels again flood the marshes and swamps during the wet season. 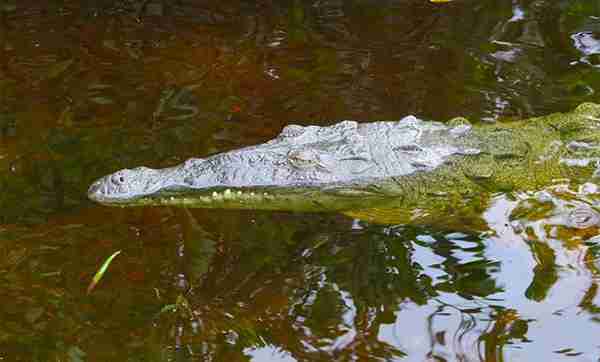 Unlike the alligator, the American crocodile in Florida is almost completely confined to the brackish and salt waters of the southern tip of the state, including the Keys. America. It is not adapted to cold weather like the alligator and, therefore, could not survive in northern Florida.

American crocodiles attain about the same size as American alligators but, in general, crocodiles in Florida are shyer. This behavior is probably because they live in habitats where they do not often encounter people and have less opportunity to become accustomed to the presence of people. In contrast to adult alligators, which are mostly black, with yellow banding particularly prominent in juveniles, crocodile coloration is brown to olive green. The crocodile’s snout, seen from above, is much more tapered and comes to a narrower tip. Also, the large fourth tooth, counting back from the front end along either side of the lower jaw, is conspicuously exposed on the outside when the mouth is closed.

Crocodiles do not build ponds as alligators do, at least in Florida. Instead, they construct dens in the banks of tidal creeks or canals and wear trails through mangroves. Preferred habitat is of moderate salinity, about half seawater strength, and protected from wind and waves.

The previous scarcity of the American crocodile in southern Florida prompted its listing as endangered in 1975 under the Endangered Species Act. However, recovery efforts were successful, and their numbers increased so that the Florida population was downlisted to threatened in 2007. They are regularly visible at the Flamingo marina area in Everglades National Park.