Because of their lower position in the food chain, invertebrates are of great importance in the diets of many Everglades predators, including fishes, amphibians, young alligators and crocodiles, wading birds, otters, and many others.

Most marine invertebrates have planktonic larval forms that are dispersed by ocean currents. Not all southern Florida marine invertebrates are strictly tropical, and some are dependent on estuaries for part of their life cycle. Three commercially important examples are the blue crab, pink shrimp, and eastern oyster. 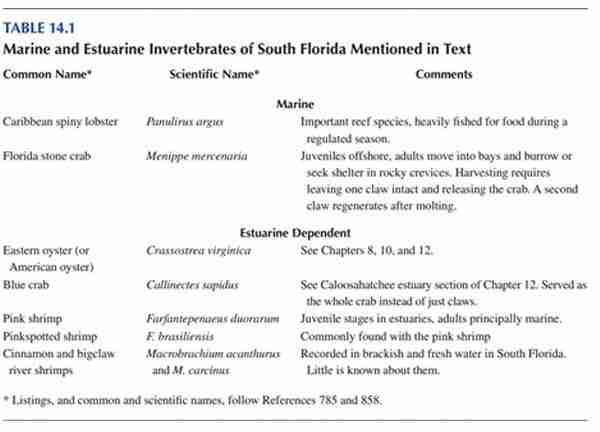 The Florida applesnail is an important freshwater mollusk in the Everglades because it is a food for many wildlife species. This large, globose, dark-brown snail, whose adults measure over 2 inches in diameter, is found in Florida’s wetlands, lakes and rivers.

Wildlife that prey on applesnails include young alligators and numerous birds. The limpkin, a wading bird related to cranes, is heavily dependent on the applesnail, but the most diet-specialized in the snail kite, a hawk like bird that feeds exclusively on applesnails. Snail kite populations are thus dependent upon management that maintains the snail’s habitat. 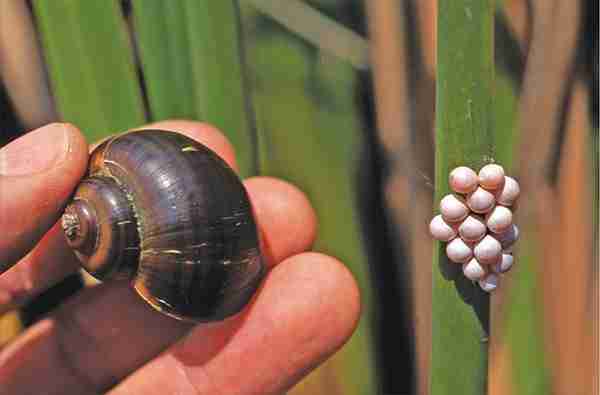 A Florida applesnail and its eggs on a cattail leaf. Photo by Tom Lodge 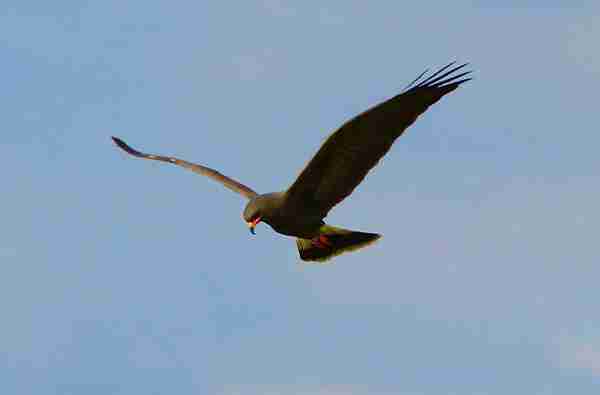 A snail kite on the hunt.

Much smaller than the Florida applesnail, the Seminole rams-horn is common throughout the Everglades. Its shell is a flattened coil but variable in shape, reaching a maximum of about three-quarters of an inch in diameter, larger than the also common and similar mesa rams-horn, which has a slightly raised, flat-topped spire. These two species are endemic to the Florida peninsula and confined to fresh water. Their shells are good markers for soils developed in freshwater.

Florida hosts about 50 species of crayfish, which look like miniature facsimiles of the marine American lobster, but only five occur in the southern half of the peninsula. Crayfishes are highly important in food chains and documented to be preyed upon by at least 40 species of vertebrates in the Everglades, including largemouth bass, pig frogs, young alligators, and all wading birds, particularly the white ibis. 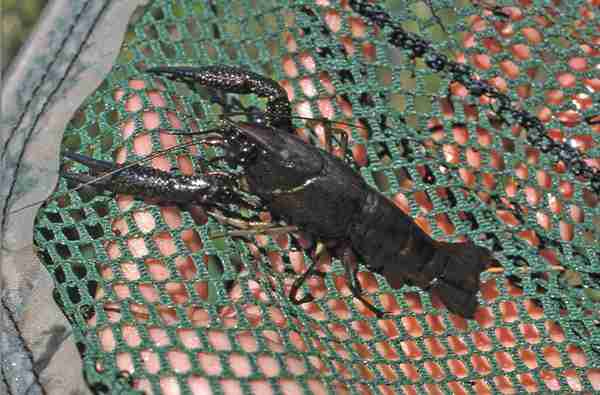 Two other abundant crustaceans in the Everglades are the riverine grass shrimp* and the sideswimmer amphipod, both considered “keystone species” because of their importance in food chains. The grass shrimp resembles the edible pink shrimp, except that it grows only to about an inch long and is so transparent that it is almost invisible. Riverine grass shrimp feed primarily by shredding dead plant material, and, in turn, nearly all predatory fishes eat them.

The common Everglades species of side-swimmer or scud (technically an amphipod) is a quarter inch crustacean that superficially resembles a miniature shrimp but lacks the extended tail. There are about 90 species of freshwater amphipods in the United States, but only Hyalella azteca occurs in the Everglades. Scud populations can be as abundant as 9,000 per square yard, but are usually only a few percent of that density. They feed chiefly by scraping periphyton from surfaces, and in turn are eaten by other aquatic invertebrates and small fish.

Aquatic insects are also important in the food chains of the Everglades, as they are in all freshwater habitats. Numerous insects (e.g., water scavenger beetles and giant water bugs) are primarily aquatic but have retained the ability to fly and will relocate if their environment dries up. Most species that inhabit aquatic habitats, however, live in the water only as larvae and emerge to live in the air as adults. Prominent examples are mosquitoes, mayflies, damselflies, and dragonflies, and a large number of midges—tiny insects related to flies. Their dual lifestyles represent a significant transfer of energy from aquatic to terrestrial environments, where flying insects are important in the diets of many birds. 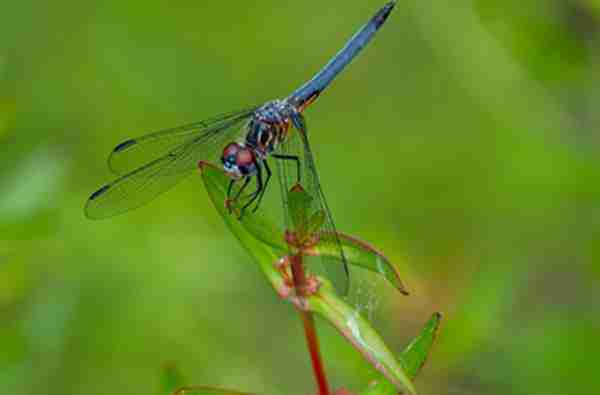 Of the 86 species of dragonfly that reside in the Florida peninsula, only about a dozen reproduce in the Everglades, primarily because the limited kind of habitat (marsh) is not suitable for the species that require the moving water of streams in their larval stage, or forested habitat as adults.

Although they are terrestrial invertebrates, many spiders utilize a means of dispersal that is more normally associated with plants, namely wind. Young spiders of many species are known to climb to a high point on a plant or obstacle and release a length of silk into the air. When the trailing silk is long enough, a breeze can pull the spider into the air. The process is called ballooning, and it accounts for the occurrence of many tropical spiders in southern Florida.

Two scorpions occur in southern Florida. Both can deliver painful but not dangerous stings (unlike an Arizona species that is potentially fatal) from their large, tail-tip stinger, which is used for stinging prey as well as defense. Their relatively delicate crayfish-like claws are harmless and used for holding prey, such as insects and spiders.

The Florida tree snail (Liguus fasciatus), a tropical species, is a terrestrial mollusk of great interest in Florida. It is restricted to the extreme southern portion of Florida, but it also occurs in Cuba. It feeds on small epiphytes, such as lichens, on tropical hammock trees, usually those with smooth bark such as wild tamarind. These large snails grow to a length of about 2½ inches and are highly variable in coloration, which is the basis for the high level of interest among shell collectors and other observers. As many as 50 distinct varieties have been found, ranging in color from pure white, to various banding and streaking patterns of green, yellow, pink, and brown, to individuals almost completely colored in brown and yellow tones. 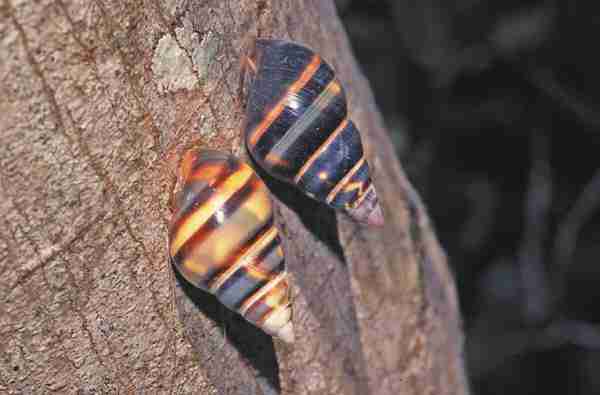