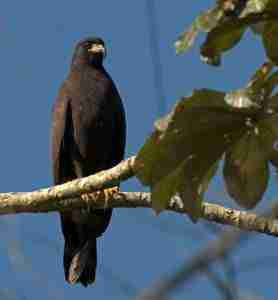 Hovering dozens of feet above the Everglades marsh, a hawk falls rapidly towards the water surface, hovers just above the surface, drops into the water, and then emerges with its talons tightly grabbing its prize – The prey is not a bird or a rabbit, but a snail. The hawk heads to a bush, where it alights, snail in talon and there uses an incredibly curved bill to extract the snail from its shell. This Snail Kite is surely one of the more bizarre raptors of the world, but it is one that is emblematic of the Everglades, so much so that for years it was called the Everglades Kite.

It is no longer called that in recognition that it occurs also over much of South America and in the great wetlands of southern Mexico and Cuba. And it occurs elsewhere in Florida, especially around Lake Okeechobee and central Florida lakes. But it is in the Everglades that is the core of its range, and where it is easily observed, studied, and photographed – – Drive out the Tamiami Trail toward Shark Valley and watch the northern side of the road for soaring, hovering or perched kites. Look particularly around the Miccosuki restaurant. Or head out to the Loxahatchee National Wildlife Refuge. Patient observation should reveal a kite. Males are grey; females and young are brown. One of the characters to look for at a distance is the white patch on base of the tail, but beware of confusing them with Northern Harriers that may work the same areas, also glide and hover, and have a white patch; theirs is above the tail.

This kite principally eats apple snails, only one species of which occurs naturally in the Everglades It is the largest species of freshwater snail in North America. Related snails are found in tropical wetlands around the globe, and in fact another species has been introduced in Florida through releases from aquaria. There is some concern as to whether kites are able to efficiently eat the exotic snail, which seems to be replacing the native snails in some lakes. High populations of native large apple snails occur mostly where marsh water levels are relatively deep and persistent. And kites can best catch them where emergent marsh vegetation is sparse, especially along the edges between sparse and thicker marsh vegetation. But, of course, much of the Everglades naturally dries periodically, even annually. When water disappears, snails become unavailable; many aestivate in the mud; and in severe or prolonged drought snails die and populations decrease. Populations persist longest in places where the marsh doesn’t dry for long. To find places where snails are common, large, and accessible, a basic strategy of kites is to move around a great deal, exploring. Radio tagged Snail Kites have been shown to move from the southern Everglades to Central Florida within a year and change feeding wetlands on average every three months. Or if an area stays wet and productive, a kite may remain there. They are remarkable in finding snail concentrations, and when they do they often nest nearby. In Panama for example, within a couple years of apple snails being artificially introduced in Lake Gatun in the Panama Canals, Snail Kites – not previously known to nest in Panama – were breeding on the lake. That said, recent research suggests that most kites in Florida tend to stay more or less in the same area; so kites tend to stay in the Everglades rather than passing over the inhospitable agricultural areas on the way to more northern habitats, a translocation that poses challenges, risks and disadvantages to staying in the area that a kite knows well. 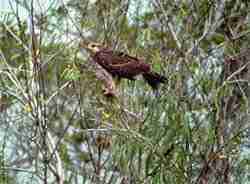 Nesting in Florida usually is in bushes over the marsh, but it doesn’t mind nesting in emergent grasses and sedges. They nest mostly from January through mid summer, but they can nest any time of year that the snail hunting is good. An itinerate species, when feeding conditions are good the kite nests quickly, completes its nesting in 3 months, and renests quickly.

Over all of its Florida range, it is in the Everglades where its survival skills are especially being put to the test. Since kites have always been a part of the Everglades and the Everglades is characterized by seasonally fluctuating water levels and much of it dries annually, how are kites compatible? Kite biology suggests to us that, in its natural condition, the Everglades was quite variable, with some places drying in most years, some places in some years, and some places in few years. And some places dried one year but not another. Variable rainfall patterns from year to year, month to month and place to place meant that somewhere was wet enough for snails and for kites, and these places they found through their nomadic peregrinations. A restored Everglades would require the maintenance of such natural variation over its full extent as well as places that are immune from severe drought.

But for now, the kite best can be seen and appreciated in places where water levels tend to be high for most of the year because water flow backs up behind levees or is directed into an area by water management decisions. This is why these days they are especially fond of the southern end of Conservation Area 3A and 3B and southern and eastern edge of Conservation Area 2B, two areas considered to be of critical importance to the species in Florida. In the 1970’s a Snail Kite was an unusual sighting in the southern Everglades, but now they feed and nest not only in the Conservation Areas but in recent years even in the cypress swamps south of the Loop Road where water levels were exceptionally high for several years. Periodic severe droughts also seem to have an impact on the Everglades population, out of proportion to the event itself. One would expect a long-lived bird to be resistant to periodic hard times, but perhaps the Everglades system is not as accommodating as it once was. A severe drought in the 1990’s reduced the nesting population by over a half, from which it has yet to recover. And it appears that nesting success in the Everglades is declining year by year. It is now recognized that in Florida, it is the Everglades that is now the most critical habitat for the local subspecies. Its future in the Everglades is far from assured, and computer simulations of its future are frightening indeed.

Things change in the Everglades, naturally as rainfall varies and artificially as water management decisions change. New understandings of the role of severe drought in population sizes is a matter of exceptional concern, as perhaps these could cause the kite population to decline below a viable level, in the long term. For now, if one provides the water regime appropriate for the vegetation and the snails, likely the kites will come. As is the case for most species, protecting and providing appropriate habitat conditions, albeit for this species perhaps on an intermittent basis somewhere over the entirety of its Everglades range is the key for the continued persistence of the “Everglades” Kite in the Everglades.