Nathaniel Reed (From eye on miami)

Nathaniel Reed, a champion of Florida’s environment, passed away after an accident while fishing for salmon on a river in Canada. He was 84 and had lived a full and purpose-driven life. 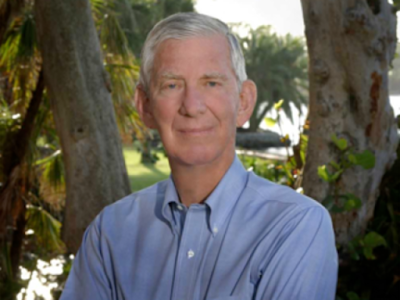 I met Nathaniel in 1988 in Key West. We shared a love of fishing, and he was a mentor in advocacy for protecting Florida Bay and the Everglades. Nathaniel was an idealist whose ideals were tempered by pragmatism. He was friend and, as a result of a long career in public service — both in state and federal government appointed positions — a unique one.

Our fishing was in Florida Bay with a guide, poling a narrow draft skiff to catch and release bonefish, permit and tarpon; species that inhabited shallow water, seagrass flats when the tides, the current and weather were right. I last fished with him, west of Key West with his longtime guide, Gil Drake, a few years ago. It was a windy, grey late winter day in the Marquesas. We were after permit; notoriously finicky and hard to see much less catch.

It had been discouraging fishing and cold. Gil’s back was aching from poling the boat sideways to wind and current. At lunch he anchored the push pole off the fishing tower, on the far side of the Marquesas in a little channel against a sand bar. The boat rested in about two and a half feet of water.

We had unwrapped our sandwiches and started to eat when Gil said, “Fish, two o’clock.” Nathaniel dropped his sandwich, grabbed his fly rod and cast where Gil was pointing. We waited a second, then the line went tight and streamed off his reel. Nathaniel didn’t bring that permit to the boat — it scampered off –, but we all had a great laugh. Nathaniel’s laugh, always being the loudest. The unstated joke of that moment; it’s the grace of God that puts a permit on your rod when you are not even looking. That is how I will remember Nathaniel.

He caught a lot of fish in his life, way more than I ever will, but when I fished with him, it wasn’t about the fishing. Our conversation was like downloading an encyclopedia on history, the environment and politics.

Nathaniel was a moderate Republican. He was from a family of wealth and privilege, and the idea of noblesse oblige rankled some powerful politicians who opposed him. They missed the point. Protecting the environment is not about deal-making, although — yes — there are always deals. It is about responsibility. Nathaniel could support a bad deal and grit his teeth, but he never forgot the score.

Nathaniel was from a generation of Florida leaders who didn’t need to be persuaded about the value of Florida’s natural heritage because they, too, had experienced it directly. In the Everglades. In the rivers and bays and streams. Democrats AND Republicans. He was outraged by what happened on his watch.

Nathaniel’s brand of Republican has been burned out by the conservative right. Although he served as a political appointee under conservatives, like Richard Nixon and Gov. Reubin Askew, the ethos of protection and conservation — of assessing the costs of toxics and pollution where they originated — has sharply diminished.

Nathaniel was not just among the early generation of environmentalists, he was among the generation that created and implemented both big national environmental laws and state ones, like the Growth Management Act. I know of no other non-elected Floridian who had been so involved at both these levels of government.

He was unfailingly cordial and correct in a way that is also endangered. He valued knowledge. Knowledge of the natural world, knowledge of the law, knowledge of business and farming and the science of things. And he remembered just about everything. He was a terrific story-teller, in a voice filled with laughter.

For environmentalists in Florida who have faced such a steep climb, humor has its purpose. It is an antidote to the pain of listening to charlatans and demagogues rattle on about “shared adversity” when, in fact, the net result is so much loss over so many years.

Nathaniel had a mental rolodex of agency staff and scientists and engineers. He had a serious, in-depth understanding of the operations of Florida’s water management system, at a level of intricate detail. He was an informal advisor to US senators, congressmen, and to governors who would listen. Answers to specific problems, for Nathaniel, were never more than a phone call, a fax, or email away. He brought these skills to the Everglades Foundation as an original board member.

Earlier Nathaniel served on the board of the South Florida Water Management District. Like many environmentalists, he was deeply disappointed by the slow, agonizing progress forward on Everglades restoration. He was diplomatic, even though his opponents — whether sugar barons or the state’s large development and water resource engineers — scorned him. He was always up for an honest fight.

As founder of 1000 Friends of Florida, Nathaniel brought together the gamut of Florida development interests and legal minds to implement, protect and improve the state’s Growth Management Act. Under his leadership, 1000 Friends became the most important state advocacy organization for the effort to tame low-density, urban sprawl and to reinforce protection for the state’s treasured natural resources. It was a terrible blow to him and so many citizens when successive governors and Republican legislatures eviscerated the agency charged with promoting growth management, the Florida Department of Community Affairs.

Nathaniel’s heart was in the Everglades. He never gave up hope that if the right energy could be mobilized, if the right resources and political pressure applied, if the right laws could be written and enforced, if property rights could be protected at the same time as the jobs that depend on a stable environment, that we could succeed in restoring a badly damaged ecosystem. Success was always, for Nathaniel, within grasp — just like a permit at the end of his line. A permit he would always let go at the end. Because that is what grace and good fortune is about: accepting and releasing the bounties God has blessed us with. They are not for us to take. They are what we hold in trust for future generations.

No: we are not here to dominate the earth, but to nurture and to share its blessings. God speed, Nathaniel Reed.