The mosaic of habitats found within the Greater Everglades Ecosystem supports an assemblage of plant and animal species not found elsewhere on the planet. For example, eight distinct habitats have been identified in Everglades National Park alone. This does not include areas to the north of the National Park, such as Lake Okeechobee, and the lakes and flood plain of the Kissimee flood plain. Below are listed brief descriptions of the eight most well known habitats. The interested reader will find further descriptions and pictures of the fauna and flora of these habitats by following the links and descriptions from the Florida Museum given below for each habitat, as well as the National Parks website. 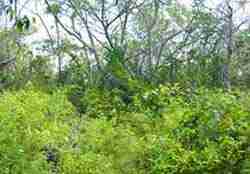 A hardwood hammock is a dense stand of broad-leafed trees that grow on a natural rise of only a few inches in elevation. Hammocks can be found nestled in most all other Everglades ecosystems. In the deeper sloughs and marshes, the seasonal flow of water helps give these hammocks a distinct aerial teardrop shape. Many tropical species such as mahogany (Swietenia mahogoni), gumbo limbo (Bursera simaruba), and cocoplum (Chrysobalanus icaco) grow alongside the more familiar temperate species of live oak (Quercus virginiana), red maple (Acer rubum), and hackberry (Celtis laevigata). This diverse assemblage of plant life supports an equally diverse array of wildlife. More pictures and further description 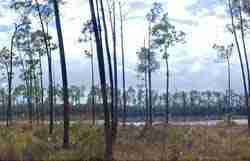 Known as pine rocklands, these forests often take root in the exposed limestone substrate of south Florida. Though the rugged terrain is canopied almost entirely by slash pine (Pinus elliottii var. densa), the understory boasts an amazingly diverse assemblage of flora, including numerous endemic species that grow only in the local area. More pictures and further description 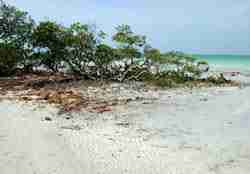 Mangrove forests are present in the coastal channels and winding rivers around the tip of south Florida. The term “mangrove” does not signify a particular botanical relation, but rather is used to identify several species of salt-tolerant trees that thrive amidst the harsh growing conditions of the coast. Mangrove habitat serves as a valuable nursery for a variety of recreationally and commercially important marine species. During the dry months, wading birds congregate here to feed and nest. And during the summer months, these mangrove forests provide the first line of defense against the howling winds and storm surge of hurricanes. More pictures and further description 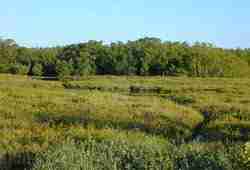 Located between the tidal mud flats of Florida Bay and dry land, the coastal lowlands are a well-drained region of shrubby, salt-tolerant vegetation. Periodic flooding and the onslaught of heavy winds brought on by tropical storms and hurricanes keeps these areas markedly devoid of mangroves. Salinity levels vary greatly among the lowlands, yielding a variety of salt-tolerant communities that thrive here. Succulents and other low-growing, desert-like plants that can withstand the harsh growing conditions of the coast, characterize these communities. More pictures and further description 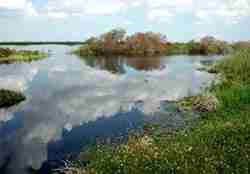 A slough is a low-lying area of land that channels water through the Everglades. These marshy rivers are relatively deep and remain flooded almost year-round. Though they are the main avenue of waterflow, the current remains leisurely, moving about 100 feet (30 meters) per day. Dotted with tree-islands, the vast Everglades landscape channels life-giving waters from Lake Okeechobee southward. Everglades National Park contains two distinct sloughs. On the west is the larger Shark River Slough, also known as the “River of Grass.” The smaller, narrower Taylor Slough lies to the east of Shark River Slough. Both sloughs discharge into Florida Bay. A series of other sloughs that flow through the Big Cypress Swamp supply freshwater to western Florida Bay and the Ten Thousand Islands.More pictures and further description 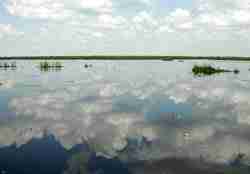 Large areas of freshwater marl prairie border the deeper sloughs of the Everglades. These relatively short-hydroperiod marshes are typified by a diverse assemblage of low-growing vegetation. A complex mixture of algae, bacteria, microbes, and detritus that is attached to submerged surfaces, periphyton serves as an important food source for invertebrates, tadpoles, and some fish. Periphyton is conspicuous and is the basis for the marl soils present. The marl allows slow seepage of the water but not rapid drainage. Though the sawgrass is not as tall and the water is not as deep, freshwater marl prairies look a lot like freshwater sloughs. More pictures and further description 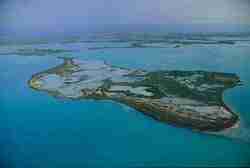 Florida Bay, the largest body of water within Everglades National Park, contains more than 800 square miles of marine bottom, much of which is covered by submerged vegetation. Seagrass and algae provide shelter and sustenance to numerous marine organisms, which in turn sustain the food chain that supports all higher vertebrates in the bay. The hard bottom areas of the bay are home to corals and sponges. A wide variety of commercially and recreationally important fish, crustaceans, and mollusks thrives within the estuarine environment of the Everglades. The continued health of these marine environments is important in sustaining productive fisheries outside park boundaries. More pictures and further description. 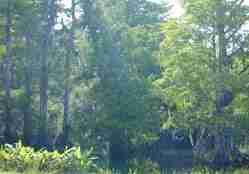 Cypress trees, the most flood-tolerant of all Florida tree species, grow in areas that are covered in water for longer periods than the surrounding marshlands. Two species of cypress occur in the Everglades, the bald cypress (Taxodium distichum) and the pond cypress (Taxodium ascendens). Within the Everglades, cypress swamps are restricted to Loxahatchee National Wildlife Refuge and east of Shark River Slough and into Taylor Slough in the southern Everglades. More pictures and further description