Gil Smart is no stranger to the fray. During his more than 30 years as a journalist, he investigated complex subjects and crafted insightful arguments to help people understand difficult topics. 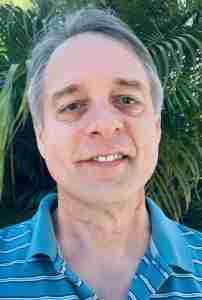 The environment is a subject he dove into time and time again. As a columnist at TCPalm, Gil wrote about pollution of the northern estuaries and the Greater Everglades, calling out the exploitation of the state’s natural resources. He’s raised an editorial eyebrow many times to Florida’s woefully inadequate water-management system, noting its continual infliction of damage on local communities and the statewide economy. His fiery columns have dug deep, and ruffled feathers along the way.

Friends of the Everglades founder, Marjory Stoneman Douglas, spent the early days of her career in a newsroom reporting for the Miami Herald before turning her life mission to protecting and preserving the only Everglades in the world. Turns out years of reporting the facts surrounding Florida’s environmental struggles has a knack for inspiring journalists to use their talents, passion, and ambition for an even greater good.

“As we face more potential ‘lost summers’ laden with red tide and blue-green algae, I’ve increasingly felt the need to be directly involved in the fight for cleaner water rather than just sitting on the sidelines pontificating,” Smart said. “Friends of the Everglades is a dynamic, passionate organization fighting for a worthy and necessary cause, and I hope to help them make a real difference.”

As Director of Policy, Smart will take the lead on tracking legislative action in Tallahassee and Washington D.C. that impacts water policy and Everglades restoration. In turn, this work will help to shape smart policy priorities benefitting the people and ecosystems of Florida. Smart begins his new post March 22.

“Friends of the Everglades has a 52-year track record of fighting the forces of environmental destruction, and Gil Smart is an ideal person to amplify that proud tradition,” said Eve Samples, Executive Director of Friends. “During the toxic algae outbreak of 2016, Gil hand-delivered more than 10,000 residents’ messages to then-Gov. Rick Scott’s office in Tallahassee, calling on him to fix the problem. As a journalist, he wrote incisively on Florida’s broken water-management system. Now, we’re thrilled to have him join us on the front lines of the fight for clean water and Everglades protection.”