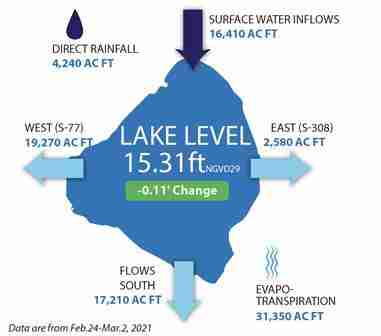 Damaging discharges are flowing to the Caloosahatchee & St. Lucie Estuaries

Take a look at the image above. It tells the story of an emerging crisis in the northern estuaries, as Lake Okeechobee looms high and the rainy season approaches.

On Saturday, March 6, the U.S. Army Corps of Engineers increased releases from Lake Okeechobee, sending 500 cubic feet per second (cfs) east from the St. Lucie Lock and maintaining releases of 2,000 cfs from the W.P. Franklin Lock and Dam west of the lake.

Releases are an attempt by the Corps to reduce the risk of large discharges from Lake O later in the year, when harmful algal blooms are more likely to be present — but there’s debate and discontent from both coasts about the effectiveness of the current releases.

According to the 3-3-21 NOAA report, moderate levels of red tide continue to plague areas of the west coast, no doubt buoyed by weeks of consistent Lake O releases. On the east coast, the current rate of release to the St. Lucie is only capable of lowering Lake Okeechobee by an average of 1/32 of an inch each day. That hardly feels worth the damage to the estuary, which suffers harm from any level of lake releases.

Too little too late?
The South Florida Water Management District reported that between May 1 and February 25, just over 6% of water treated by the stormwater treatment areas came from Lake Okeechobee. The remainder was Everglades Agricultural Area runoff. Despite water moving south now, stakeholders from both coasts note that Lake O is still too high and recession rates remain too low. It’s yet another reminder of Florida’s flawed water-management system, which favors Big Sugar over ecosystems and the public. And it could presage another green-slime summer. We’ve seen this movie before. Over and over again.