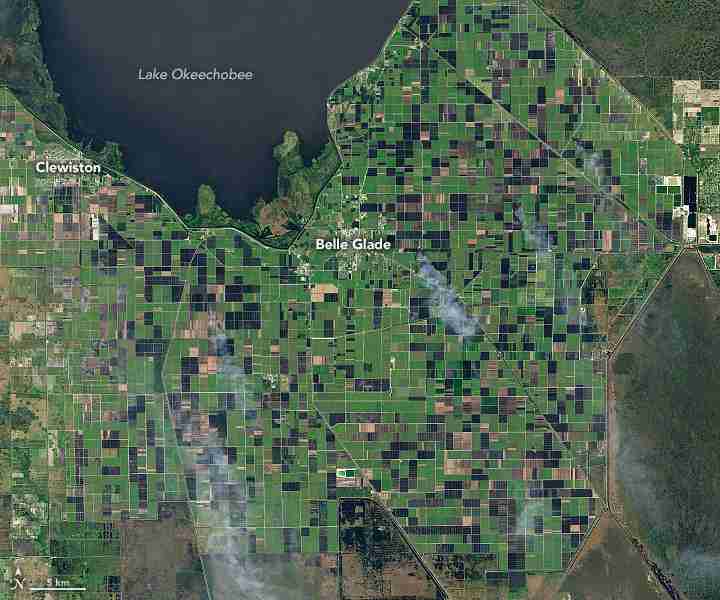 See the plumes of smoke in the satellite image above? They mark actively burning sugarcane fields, a practice that’s been used for decades at the expense of exposed residents to make harvesting cheaper. The surrounding black squares show an expansive checkerboard of recently burned sugar fields in the Everglades Agricultural Area.

Now imagine living in that area where skies regularly fill with dark smoke that causes eyes to sting and chests to tighten almost every day for six or more months of the year. In Glades communities, nestled south of Lake Okeechobee, that’s reality. Sugar companies set fire to cane fields spanning 400,000 acres throughout the winter and spring. When the skies go dark, parents pull their kids inside. Here, blazing cane fields are in close proximity to homes and businesses, elementary and middle schools. Inhalers and nebulizers are staple household items.

A bombshell investigative report by the Palm Beach Post and ProPublica, following more than a year of air-quality research and resident complaints, is putting the region’s largest sugar producers on blast for poor air quality impacting the predominantly Black and Hispanic communities of western Palm Beach County.

In other states and countries, top sugarcane producers have been phasing out the practice of pre-harvest burning for more than a decade after research on particulate matter emissions raised serious concerns on impacts to public health. Not in Florida. Here, the industry’s political strength outweighs all other U.S. crop lobbies combined, and it has claimed “the air out here is cleaner than congested urban areas.”

Their proof? A single air-quality monitor in Belle Glade that was flagged eight years ago as unfit to enforce EPA standards.

The latest findings, and the Post and ProPublica’s ironclad response to Big Sugar’s criticism of the reporting, are reviving important conversations about inadequate protections for impacted residents. This investigative journalism should prompt an overdue moral awakening from government agencies and elected officials. Sugarcane burning is unjust and dangerous, and it must be phased out in Florida.

You can help us urge Agriculture Commissioner Nikki Fried to expand real protections for communities most impacted by the pre-harvest practice of sugarcane burning, until such a time that pre-harvest burning is banned entirely, by using the button below to send a pre-formatted email.